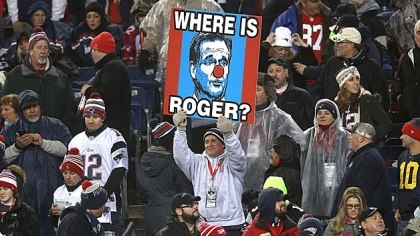 Clearly, the job of NFL commissioner is rife with stress and pressure.

However, in such a high-profile position, an acute sensitivity to mockery is not the best personality trait to possess.

Unfortunately for him, Roger Goodell appears to bear that burden, particularly when the New England Patriots are concerned.

If you recall, there was a rather benign incident involving Patriots defensive coordinator Matt Patricia and a novelty t-shirt after the Super Bowl back in February.

Here's the shirt in question:

That t-shirt is not exactly the most subtle of wardrobe choices.

Clearly, the Pats were having more than a little fun with Goodell after their historic Super Bowl comeback against the Atlanta Falcons, as memories of the Deflategate nonsense are still pretty fresh.

In addition to the Patricia material, other Patriots had some fun at the Commish's expense during the victory parade in Boston.

Incredibly, it appears that Herr Goodell is still a bit salty about the t-shirt.

The relationship between the Commissioner and the Patriots franchise is and always will be a complex one, but this dude really needs to let this one go.

Nothing good can come from being this sensitive, and Goodell should most certainly be used to the criticism by now.

However, he clearly has a sizable blind spot for Brady and the Pats, due in large part to the complete farce that Deflategate was from the very beginning.

In the meantime, let's turn that frown upside down while enjoying this Tom Terrific Super Bowl highlight package.

Yeah, that may have been counterproductive.