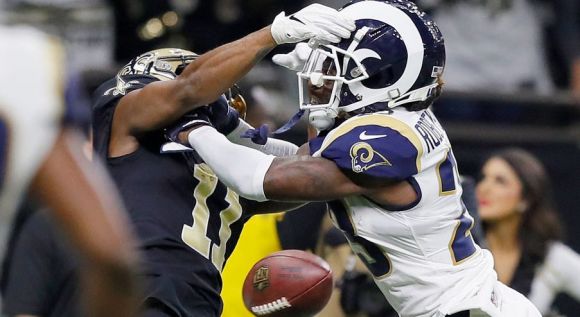 It's probably the most egregiously subjective call in sports.

But nothing can change the course of a game more often and more significantly than the dreaded pass interference call.

That's the one that'll live in Cajun infamy, of course.

To this day and likely forever more, Nickell Robey-Coleman's early and non-called arrival is the play that kept the Saints outta the Super Bowl.

The national furor was enough for the usually impenetrable Shield to knee-jerk a rule change that wound up being a cure that was worse than the disease.

Thankfully, the usually infallible Shield has seen the error of populism and ditched that rule after one agonizing season.

This result was foretold between the lines in this interview that took place before the 2019 campaign even got under way:

Put another way, no wonder replay reviews are so damn long, and when it came to the pass interference replay rule, for what?

It was a disaster from the outset.

Maybe the late XFL 2.0 tried to put a happy face on the delays for a ruling by putting a mike and camera in the replay booth, but that's still not what the paying public came to see.

Instant replay is destined by definition to lead us straight into the Matrix because of technology's relentless advancement. The issue is and always has been, where do sports draw the line?

So it should be for every sport. There will always be a Don Denkinger or Saints-Rams incident at a crucial moment here and there, but at the end of the day, they'll always be games played by humans and judged by humans.

Odds are baseball's gonna discover that hard truth yet again.