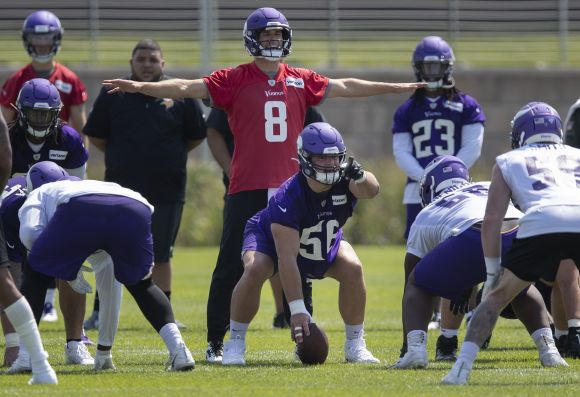 Kirk Cousins seems to have an instinctual gift for making things super-awkward.

After the Minnesota Vikings turned into one big skidmark last season, the $84million QB and his teammates weren't vibing very well at all.

Then Kirk foolishly decided to use social media as a vehicle to completely alienate the entire state of Minnesota.

Now, the unconventional backyard griller seems to be going out of his way to publicly embarrass a fella by the name of Garrett Bradbury, who just happens to be his rookie center.

Apparently, the dude who was drafted in the first round and tasked with the critical job of transferring the football safely into the hands of Cousins has a problem with excessive perspiration.

We know this because Kirk won't stop talking about this poor kid's sweaty ass.

Here he is giddily discussing another man's butt for over a minute:

So very not cool.

Of course, if anyone would know, it'd be Kirk and his probing hands.

While that actually isn't footage of Bradbury in action, the neophyte seemed to handle his NFL debut just fine in a pre-season battle at the Superdome against the New Orleans Saints.

We assure you Bradbury was out there somewhere, although there was no visible puddle.

The NC State product talked about working with Cousins a few weeks ago, notably refraining from saying anything personal or hurtful about him:

Several towels were reportedly placed strategically under the podium, just in case.

Perhaps the 2020 NFL Scouting Combine will feature some sorta drill or exercise that could identify swamp-ass in centers before any other veteran QB's are put at risk.

Before it's too late.