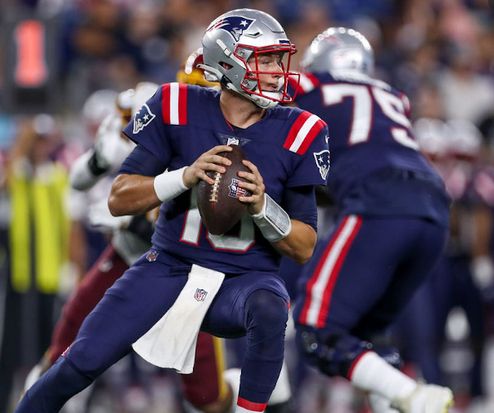 Somewhere, in a high school or community college classrom where logic is taught, a hella lotta head-shakin's gotta be going on.

This only becomes Belichick vs Brady because it's an easier PR sell. Kinda like opponents' fans nicknaming the Miami Dolphins the Fish is easier to splash on homemade placards.

However, as usual, even though dude was upstaged for most of the night, logic and past performance got Brady engineering a game-winning drive when it absolutely had to happen.

It wasn't without a bitta logic -- or rationalization -- on an official's part, though, to let the players decide the game.

Take this key play in that fateful drive:

Brady to Godwin into FG range.

It's not all that often that a DB falls backward of his own accord when he's trying to break up a pass.

Looked like Chris Godwin made certain that having a shot at breaking it up wasn't in the cards, though:

So the play stood as non-called, and the stage was set for the go-ahead field goal by Ryan Succop from an NFL-vanilla 48 yards out.

In contrast, splitting the uprights from 50+ yards out aren't so blasé, so when one of them has both the range and accuracy, it's news.

When one of them misses, then, it isn't. Usually. Unless it's the doink heard 'round the NFL world:

NBC's sound engineer should be getting a raise.

Had Nick Folk defied the elements -- it was windy out there -- and knocked it through, maybe the headlines woulda featured Pats slinger Mac Jones as prominently as Belichick and Brady.

When viewed in the cold light of harsh reality, the former Crimson Tide chucker had a better night.

Jones just didn't get New England a few yards further down the field on their last drive.

In the karma category, where Brady's such a perpetual beneficiary that he ougtha get taxed on it, his was such that this was the game where his legacy of getting the ball downfield a lot garnered another milestone.

Of course they'd move it up a yard.

Which ultimately meant that in Gillette Stadium ...

He is the 7th player in the Super Bowl era (since 1966) to hold the all-time Pass TD and Pass yards lead at the same time. pic.twitter.com/ILrULgqIWo

That kinda summed up dude's night:

But just like those first innocuous little mammals that managed to avoid being stomped on by dinosaurs in another era, Jones looks destined for greater things to come if he can stay as healthy as Brady has over the years.

And possibly hook up with whomever painted that portrait of Dorian Gray. Maybe Brady could put in a good word.