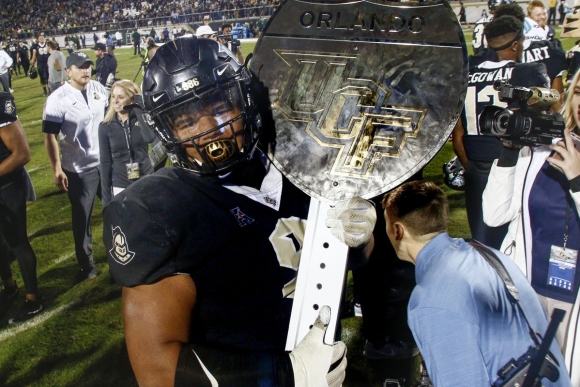 In fact, the show that UCF and USF staged was exciting enough to remind some observers that the Big XII needs II more teams if it ever wants to be true to its conference name.

More to the point, the Golden Knights and Bulls showed a level of intensity and execution that should shame the CFP Selection Committee into putting UCF into the bracket mix.

However, that crowd has no shame, and the Power Five has no time for party crashers.

Bummer. They're cheating their fans.

In what was an American Athletic Conference divisional playoff, it delivered. Big time.

What a job both coaching staffs have done this season:

This game was the result of what happens when two quality teams challenge each other to do better, which accounted for the Golden Knights emerging with the 49-42 decison.

Now, for both teams, there's more work to do.

The Golden Knights have an appointment with Memphis for the AAC title. It shouldn't go unnoticed that the Tigers are 10-1 this season.

It just totally sucks that that match's winner won't have a chance to keep going, through no fault of their own.