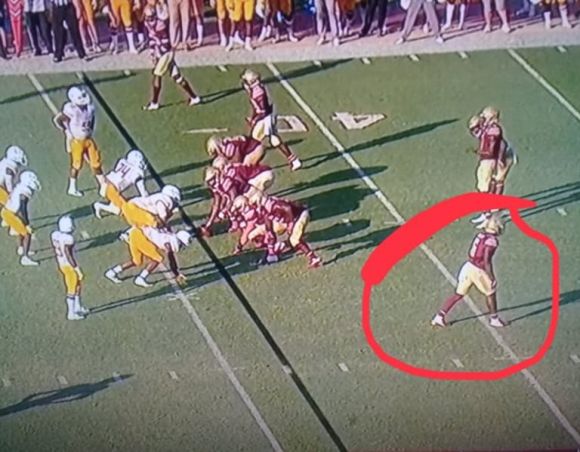 If not for the existence of the Tennessee Volunteer football program, Florida State would be the most popular NCAA punchline right now.

After losing their opener at home to Boise State, the Seminoles needed a missed XP in OT just to sneak by Louisiana-Monroe, 45-44, also at home.

This is all very embarrassing for anyone even tangentially connected to the program, but there was one development in this latest game that really had folks questioning the entire operation.

It involved a junior TE by the name of Tre McKitty, who became very popular during the game for a very peculiar reason.

We appreciate your patience and understanding.

The following screenshot taken from this weekend's game should illuminate you:

The current state of Florida State football summed up in one picture. pic.twitter.com/7fLROn1kBB

That's just not normal, regardless of context.

Okay, so let's see what dude does as the play unfolds:

Photos can be misleading when you don’t actually watch the game. 11 yard gain after he’s put in motion. Stay hot pic.twitter.com/grNVpToPLA

Sure, that's fine and all, but what tactical advantage did the Noles' procure from having a player face the wrong way?

That befuddled announcer didn't seem to have one single clue.

The dude who tweeted the screenshot seemed almost angry about it:

I saw it live. Still lame.

Great come back win against ULM though. Lol.

Fortunately, we've been provided some clarification from McKitty himself, as his fleeting Internet fame compelled him to respond:

Tre' McKitty discusses the Backwards Nole play and assures everyone "there's nothing wrong with me," and that he knows which way to line up lol pic.twitter.com/5R6wRZNASq

See, there's nothing wrong with him.

Everyone else is backwards.

Briles: "It was a stopping situation where you cannot tempo, so we came off the sideline and it's a thing that we do offensively. The guys can line up wherever they want. I don't care. Just get to your spot where you need to get to. We pushed the tempo and I think we gained 11."

He can use the word tempo as many times as he pleases, but this shit still won't make one bit of sense.

The cognitively impaired Seminoles will be getting into ACC play starting next week, so that should be good for some more hearty chuckles.