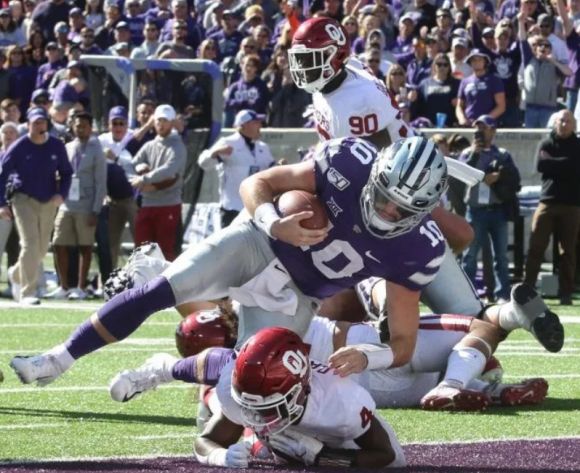 One of the most tragic casualties of what ultimately resulted in the Power Five expansion was the disappearance of the WAC as a football conference.

For whatever the reason -- thin air in the Rockies, magnet for creative coaches like Hal Mumme, Dick Tomey, Chris Petersen, etc -- the Western Athletic Conference was known for high-flying games.

Ironically, that trait didn't really get passed along to its direct descendant, the Mountain West.

Instead, somehow, the Big XII got the Big Offense gene ... or was it the Defense Optional gene. We're not sure which. We don't do biology.

It's not as if the Oklahoma Sooners didn't already know that any Big XII team can rack up points at any moment. It's just that they got caught holding the bag this time.

It's not easy to come away from Manhattan, Kansas with a win in Wildcat country. So, committing two costly turnovers goes beyond tempting fate.

Here, then, were the seeds of the Sooners' demise:

Proof yet again that it's not a great idea to spot a Big XII team 14 points in their house.

'Cat chucker Skylar Thompson had a steady day, passing for 213 yards and rushing to paydirt on four occasions. It was part of his crew's ability to avoid major mistakes on the day.

The Sooners aren't the masters of their own fate in the conference anymore, either. That distinction belongs to undefeated Baylor. They get Oklahoma in Waco on Sat 16 Nov.

The Bears had this weekend off, but they looked pretty damn good the week before, going to Stillwater and lassoing Oklahoma State:

If Baylor beats Oklahoma, no one's counting on them to jump into the CFP farce because, well, they're not the loser of Alabama-LSU or Ohio State-Penn State or the Oregon Ducks.

There'll be some sorta rehashed reason, but no sense mounting a bitch about it until the possibility arrives.

Meanwhile, keeping in mind that in the harsh light of cold reality, the CFP process is just another form of bikinis and sashes ...

The Sooners now have to go Max WAC over the rest of their schedule to impress the Committee. Getting TCU and Iowa State in Norman should help, but they go to Oklahoma State after that.

It could be enough to tax the most industrial strength of any pinball machine.