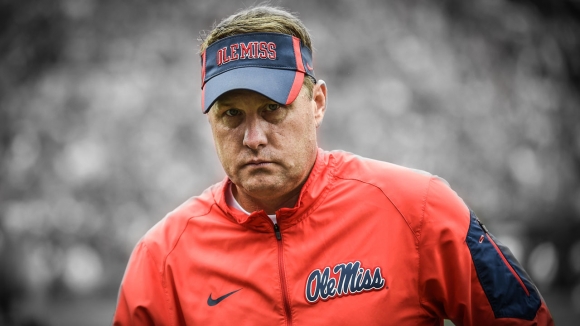 The Ole Miss football program is in a whole mess of trouble at the moment.

University officials announced a self-imposed post-season ban for the 2017 season, but the school is now facing a total of 21 compliance allegations.

This is looking rather bleak.

Despite this grim news, head coach Hugh Freeze has remained openly defiant, taking a break from not monitoring his program to trade barbs with Mike Gundy.

Of course, Gundy had recently brought up the 2016 Sugar Bowl in which his Oklahoma State Cowboys were impaled by the Rebels to the tune of 48-20.

Gundy, completely lacking in nuance, helpfully suggested that the outcome of that game may have been different if the Rebs weren't a bunch of cheating cheaters.

Freeze obviously disagrees with this completely biased assessment by Gundy.

Ole Miss really spanked the Cowboys in that game, so the fact that the Rebels were in the midst of institutional chaos probably had little to no bearing on the outcome.

It's a shame they can't just stage a mock Sugar Bowl right this very second and strap it on again.

Perhaps Freeze and Gundy could just shout mama jokes back and forth across the field.

Anyway, Ole Miss has been under suspicion pretty much since Freeze walked onto campus back in 2012, so these violations were probably inevitable.