So Call Up Markelle Fultz to the NBA, Already 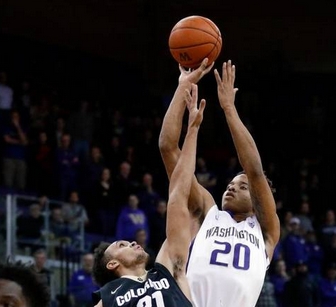 Since the Washington Huskies are currently sputtering around the .500 mark, the fact they've got the latest hoops wunderkind might've been pushed to a back burner of the national conscience.

If true, it won't be that way much longer.

Markelle Fultz is personally seeing to it.

Dude's on fire, and Colorado is the latest to get burned:

Also evident in those highlights is the ugly reason why Washington's underachieving in spite of Fultz and a capable cast of characters. Dudes treat defense like ... well ...

But, hell, Fultz will be Teflon at the next level.

D's a detail they'll forgive in the NBA because of feats like this:

Seems like he's getting accustomed to the environment. In the game before this, dude laid a 34-spot plus seven boards on Stanford at the Maples in a losing effort.

Fultz is rekindling memories of another Huskies star who had a good run at Montlake and beyond:

If the rumblings around Lorenzo Romar's job become reality, Roy could be the only replacement who'd be able to keep Michael Porter Jr as a Husky commit. Especially Porter's dad becomes a holdover from Romar's coaching staff.

By then, Fultz will be long gone, cashing kajillions, joining an impressive number of Huskies who use the program as a launching pad and then leave early, right after the Pac-12 tournament. It's been that way since 2011.

But whoa! What a regular-season highlight reel! And Fultz already has nothing left to prove.