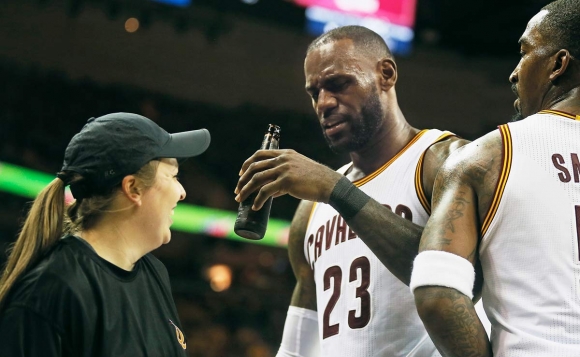 Apparently, beating the snot out of another team in the NBA is thirsty work.

Game 1 of the Eastern Conference semi-finals would provide credence to this theory.

With his Cleveland Cavaliers coasting to victory against the Toronto Raptors, LeBron James decided to have a beer.

It's fun to pretend.

While the Raptors probably weren't pleased, the crowd certainly enjoyed it.

JR Smith had a hearty chuckle, as well.

However, it turns out that Mr James doesn't really care for beer, domestic or otherwise.

He also resents having his brand compromised.

The opportunistic Great Lakes Brewing Co decided to use his image as a clever means to sell more beer.

Well, as they did this without James' consent, this was quickly shut down.

So much for Budweiser's King James presents The King of Beers promotion.

Meanwhile, back on the court, LeBron and the Cavaliers continued to bludgeon the Raptors.

No amount of beer consumption was going to make this series more competitive.