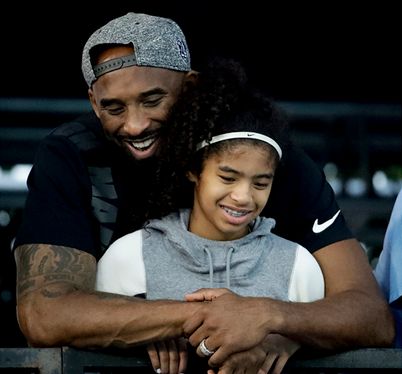 When the very first headlines about a copter crash in SoCal broke across news sites and television chyrons, it looked like a tragedy that would be deeply felt by the loved ones who were lost while the rest of us moved on to the next story.

Then the details started breaking.

This helicopter crash claimed the life of someone we all knew.

That sounds so damn clinical. Life can be extinguished, just like that.

Kobe Bryant, his daughter Gianna, and seven others perished when their charter helicopter faded into a heavy fog that masked hidden and sudden dangers.

More facts will emerge, of course, in the coming days. However, the only one that matters is nine lives have been cut too short. 'Way too short.

Was this accident avoidable? Does it matter right now?

Someone we all lost has transitioned into a memory, and that's now the only place we'll ever find him.

Purists say it takes two things before someone can truly be called a superstar:

Kobe was a superstar. Still is. Always will be.

Teams that had games today found touchingly clever ways to express this loss, using both of Kobe's jersey numbers -- 8 and 24 -- in tribute:

You know, on so many levels, those beat the hell out of a moment of silence.

Before he left us at age 41, Kobe was rarely if ever silent. Like all of us, he wasn't perfect -- learning some harsh lessons the hard way -- but with each passing year, he took more and more positive actions that would benefit those around him.

Some of them he knew. Many he didn't. Everyone mattered.

He's made sure they'll all still matter, whether he's with us or not.

The others in that chopper will be remembered for the lives they touched, too: Kobe's wife Vanessa and three surviving daughters will ultimately recover from what must be unbearable shock to remember their husband and father who placed them at the center of his world, especially after retiring from a sports career that kept him away from home for long stretches of time.

Then there's Gianna, who had her heart set on going to UConn and playing for Gino Auriemma. Kobe was her obvious mentor and coach of her team, which they were on the way to join for a game at the Mamba Academy.

Maybe there was a trace of Italian in that connection. Kobe was raised in Italy when his dad, Joe 'Jellybean' Bryant played after his NBA career was over.

Part of that worldliness showed through in his Oscar-winning short animated film, Dear Basketball, a portal into the essence of who and what he was, but only a part of why he'll be missed: