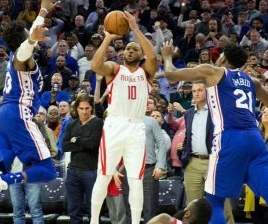 The Philadelphia 76ers are trying to figure out how to handle first-overall pick Markelle Fultz and his altered stroke.

No such issues in Houston.

Eric Gordon took in a shuttle pass from James Harden that woulda put a tear of joy in Mike Leach's eye and calmly popped a trey with the game clock showing zeroes-across.

Philadelphia went all-in on stopping the Rockets' main man, so it was hard to imagine anyone being more surprised when Harden dimed it.

OK, maybe with one exception.

Seems like a few dudes who matter in the Philadelphia organization believed this would be the year The Process would pay off. The fact they abandoned it themselves a couple of seasons ago was apparenly incosequential.

They'd only had one home game in their first four -- a 102-92 loss to Boston -- and going into final minutes of this one, at home, against a club expected to be a factor in next spring's playoff, the Sixers were in it and feeling good about themselves.

Philadelphia is still showing growing pains, and those are gonna be glaring against a club like Houston.

Mike d'Antoni's club is having its own challenges in the early going, but their core of veterans has been there and done that more than once in close games. At the end, it showed. They put themselves in a position to have a chance to win.

The net takeaways here are that Houston has to heal up and Philadelphia has to keep learning. That would include diagnosing injuries.

The Rockets' task is easier.