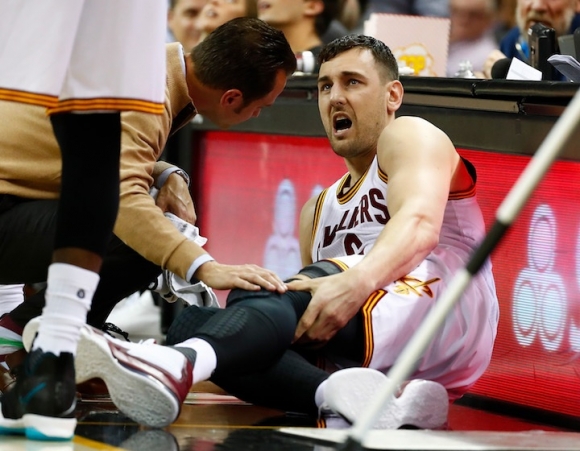 French philosopher John Calvin is famous for creating a Protestant theory of predestination.

OG preached the belief that God had already decided who among us was to be saved.

How does this relate in any way to sports?

Well, consider the predestination that is the NBA Finals.

Instead of God -- despite what's claimed in post-game interviews -- it's decided by dudes named LeBron, Curry, Irving, and Durant.

Ever since that fateful June when an historic Warriors team blew a 3-1 NBA Finals lead, the NBA world has expected a Clash 3.0 decider come 2017. And probably beyond that, too.

Sure, these clubs have experienced a few bumps along the road.

The Cavs have seen both JR.Smith and Kevin Love miss significant time this season. Most recently, the Dubs discovered they'll be without Durant for at least four weeks.

Sheesh. What a way to go out!

Despite this, both Cleveland and Golden State have been able to hold steady atop their conferences.

While squads like the Celtics, Wizards, Spurs, and Rockets will try their best to engineer upsets in their respective conferences, it’s quite likely the Cavaliers and Warriors will meet each other again come June.

In expectation of this inevitabilily, both have begun to game plan for the rematch.

Taking advantage of the waiver-wire, Cleveland thought they found a secret weapon in a former Warriors centerpiece; Andrew Bogut.

In adding the brawny Aussie, Cleveland holds a distinct advantage over Golden State at their weakest positon. As opposed to JaVale McGee and Zaza Pachulia,

Dude's a legitimate starting center, plus there's the added narrative of this being a revenge signing.

The Warriors did the same thing last year with Anderson Varejão. The big difference is that Bogut will see major minutes in the Finals as opposed to watching from the bench.

Or, at least, he would've seen major minutes.

In only the first minute of his first game as a Cleveland Cavalier, Bogut went down in pain, holding his leg.

Any hopes of good news were squashed when it was announced that Bogut had fractured his left tibia. In all likelihood, the injury will cost Bogut the season, and with that, any hopes of battling his former buds in the Finals.

While the Cavs still have enough talent to challenge the Warriors come late spring, the loss of Bogut will cause them to rethink their game plans.

Instead of being able to go big with both Tristian Thompson and Bogut, Cleveland will have to depend on the former to hold down the fort in the trenches.

There's also the issue of the Cavs now being forced to find another warm body to eat minutes until playoff time.

No doubt Bogut's going down will affect the course of this NBA season.

It's a bummer Calvin's not aronud to tell us how this whole thing ends up come June.