Apparently, It Takes a Village and Russell Westbrook to Raise a Child 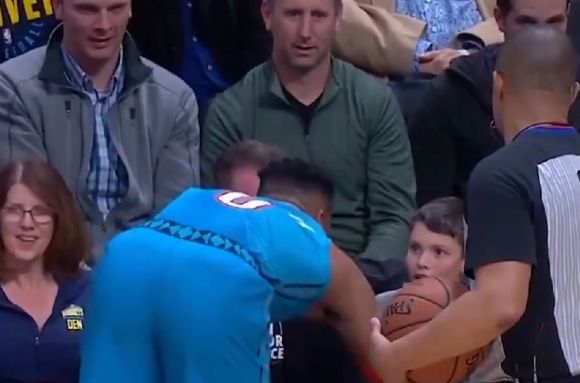 Russell Westbrook is having just another ho-hum season on his way to averaging a triple-double for the third consecutive year, which may very well be the silliest thing we've heard all day.

In addition to his basketball responsibilities, The Brodie has recently assumed another role on the court.

That's right kids, Russ is going to be your real dad now.

While he isn't necessarily moving in, Westbrook will be taking an active role in your child's life, as you don't seem to be up to the task.

Why, just the other night with the Thunder in Denver, Russ decided to place a young Nuggets fan on the road to salvation.

Now, this may not seem like a big deal, but why the hell is this kid touching the players?

And more importantly, why is his father allowing it to happen?

Clearly, dude's failed his son in every way, but fear not.

Russell Westbrook is here to fill the void.

Russ is making an awful lotta sense here and has clearly learned a valuable lesson from the former Ron Artest and current Metta World Peace.

The human triple-double dispenser has three kids of his own now, so he certainly knows the score.

However, Charles Barkley may have handled things differently.

Okay, so that's a no for Chuck.