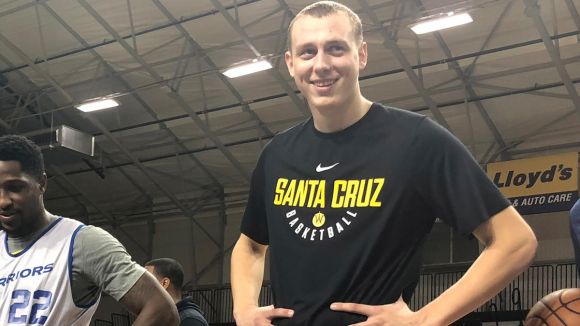 Trash talking has been elevated to the level of art in professional sports, particularly in the NBA.

Some dudes are really good at it, while others are perpetually on the receiving end.

But imagine how much shit an 18-year old from Serbia might have to eat when playing ball in the States for the first time.

Such is the case of one Alen Smailagić.

Well, he's a reasonably tall center who the Warriors selected in the second round of the NBA Draft.

Unfortunately for him, he was subjected to the expert taunting of DeMarcus Cousins for a brief time last season in Santa Cruz.

It would appear that Boogie decided to have some fun with the large Serb, even getting unnecessarily personal by saying they shouldn't be playing with Smailagić because he's probably a virgin.

You know, it's really not our place to speculate on such things.

Actually, it seems that Smailagić enjoyed the relentless abuse, although he may not have understood the terminology.

Whether or not dude's even trying to get laid is irrelevant.

The important question is, can he ball?

If only Smiley could run the floor like that with the ladies.

Anyway, our preferred trash talk takes place on the street.

Some surf-&-turf at the Sizzler would really hit the spot.