A Scalpel May As Well Be a Fork to Andrew Bynum 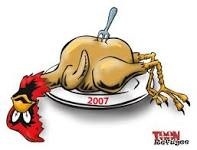 The speculation behind Andrew Bynum’s return to the hardcourt can finally be put on the back burner.  On Tue 19 Mar, the Sixers big man underwent arthroscopic surgery on both of his decomposing knees.
The result is that he will not play this season, and what's worse is that no one knows when or even if he will return.
The news is devastating to Sixers fans everywhere. That might include Germany, where Bynum traveled during the off-season in hopes that a non-surgical procedure used over there might resolve the issue. One can only imagine how they reacted!
I guess its true: the bigger they are, the harder they fall. Bynum has already gone through two surgeries during his seven years in the league.
What's next? No one has a clue what to do. Bynum will be a free agent this summer. But will the Sixers gamble to sign him? The Orlando Magic, among other reasons, sent Dwight Howard to the Los Angeles Lakers because they did not want to deal his knee issues.
It seems that was one of the most opportune disappearing acts the Magic has ever conjured up.
For Philadelphia 76ers fans, the past year has been a roller coaster ride. The Sixers beat the Chicago Bulls in the playoffs last season. They traded for Andrew Bynum, wanting to build a team around him and become a stronger candidate for a deep playoff run this season and the ones to follow. Now it seems like that's not going to happen.
It's both disappointing and frustrating that Bynum will never be the great player that so many of us hoped he could be. It's difficult to tell if he will ever play again, but one thing's for sure.
You can put a fork in Andrew Bynum for this season -- he's done.
DAILY UPDATE