Wheels of Change: It's Christmas in Daytona 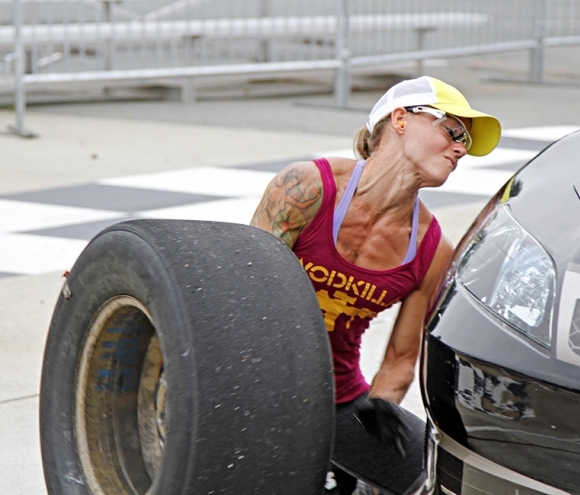 Women have finally been given the right to fight on the front lines. Soon, one of them will be earning the privilege of going over the wall.

In fact, it will be a woman who has spent time in Iraq, albeit as a civilian military contractor, during the invasion.

Christmas Abbott is the real deal. Working in a NASCAR pit crew is tough work, and she's had tough life experiences to steel her for the job. She's endured the family pain of tending to a comatose sister as the result of a car wreck. It took her on a reckless road of poor choices, culminated when she had a hard time recovering from a one-mile jog. That's when Abbott decided to snap out of it.

She went cold turkey, using the CrossFit training program to instill discipline in her daily routine while in Iraq. Adapting some of her own ideas into the workout, Abbott ultimately became an instructor whose intensity was noted and promoted by her superiors. Once sculpted, opportunities came her way. A tattoo fan who became a practitioner, Abbott was featured in Inked magazine, and her stature continued to grow.

Abbott's next natural rush came in the form of racing speed. She may be diminutive at 5ft 3in and 115lb, but her chiseled features and 250lb squats made slinging 60lb tires a simple matter. Her quick reflexes meshed well with air guns -- bolting lugs on two tires in 12 seconds -- and in December, Abbott's dream of immersion in motorsports came true. She was hired to Jennifer Jo Cobb's team in the Camping World Truck Series.

That was Abbott's ticket to Daytona.

Michael Waltrip Racing has assigned her to shadow his crew at the 500. It's the ultimate apprenticeship for Christmas Abbott. She's in a position where it will be only a matter of time before she makes history in the heart of NASCAR, slinging wheels in the maelstrom that is a pit stop on racing day.

Christmas Abbott may not be the female name that gets constantly called when the race begins, but her name will be prominent among those whose job it is to gain the milliseconds it takes for the race to be won. 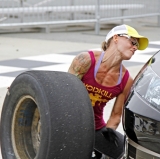 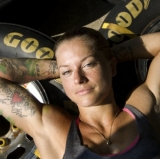