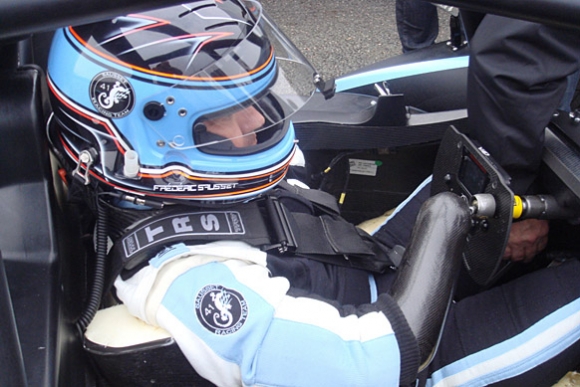 It's daunting enough for an able-bodied human to meet the challenges of a 24-hour road race, much less qualify for the most famous of them all.

But Frédéric Sausset has proven he's up to the task.

And what better stage than an event known for highlighting cutting-edge achievements?

Sausset had the tough luck of contracting a rare form of septicemia that literally ate away at his body, extremeties first. The only way to save his life was to amputate part of each limb.

Rather than curse his lot in life, the French businessman delved into his love of motorsports to provide a new purpose.

You don't need to understand the language to get the point that France's racing community rallied around the cause, adapted a car for Sausset, and provided both physical support and financial sponsorship for his three-year quest to race at Le Mans:

Audi designed a steering mechanism that enabled what was left of his right hand to control the car:

With that refinement in the books, it was on.

Between 2012 and now, le dude has ascended the podium on multiple occasions in the VdV endurance series, so he's earned his start at Le Mans like everybody else.

So when the green flag drops for this year's endurance race, no one would blame Sausset and his team if they'd already consider it to be checkered.