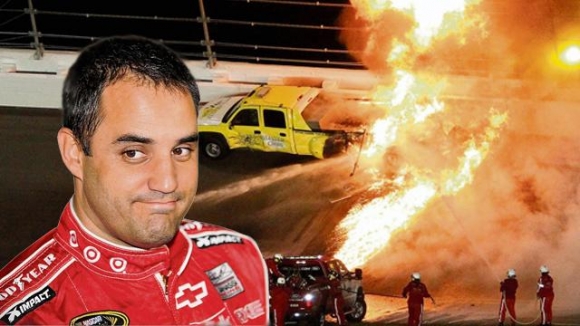 Sometimes it takes an untimely Car-B-Q to grease the wheels of progress.

When Juan Pablo Montoya slammed into a jet dryer last year, he ignited more than 200 gallons of fuel and burned a hole right through the prime-time viewing slot for NASCAR's signature event. It was enough to make NASCAR honcho Brian France pick up the phone and make a call to R&D.

Eight months later, for the first time since 1976, NASCAR has an upgrade in track drying technology. It's the Air Titan™ (the '™' is there so Michael Jordan doesn't get any ideas about suing), and it's guaranteed to cut down time due to rainy weather by 80% or two beer bong refills, whichever comes first.

Using a compression system that whooshes water from the the track to the apron, the Air Titan™ is accompanied by conventional jet dryers that remain on the apron and vacuum it in. Another jet dryer follows behind the Air Titan™ to sop up weepers, residue moisture that rises to the top of the track. Puttering along at 4-5mph, the Air Titan™ compressors are connected to a power supply that is carried on or near the apron. Those hoses span the track, so all race cars wait in the pits while this process is underway. Juan Pablo Montoya no doubt heartily agrees with this policy.

It takes two systems to dry a track, with each Air Titan™ tending to half the surface area. NASCAR wonks believe it will only take one pass for each system to get the job done.

The Air Titan™ will make its debut at Daytona during Speedweeks. Its performance will be analyzed, adjustments will be made if necessary, and then it will be rolled out to other tracks as NASCAR sees fit. 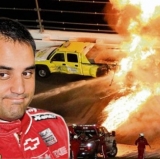 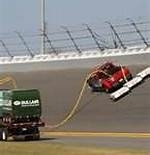