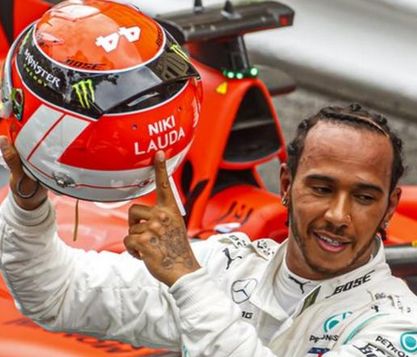 So far in the Formula 1 season, the Mercedes team has been virtually flawless.

In other words, the story that began in the 2014 season keeps writing the same chapters.

The German juggernaut has won ...

It's almost at the point where Mercedes could be named the official car of Formula 1 and all the other competitors would have no grounds to object.

If that's not enough of a mind-blowing metaphor for dominance, consider the reality. Coming into Monaco, the team had entered five races with Lewis Hamilton and Valtteri Bottas finishing 1-2 in each.

With so few opportunities to pass in the Monaco Grand Prix, it seemed all the duo had to do was start that way. But no. Something more was needed:

Team Mercedes totally misjudged the track's surface. When the 11th-lap accident sent cars to the pits, instead of opting for hard-compound tires -- like the Ferraris of Sebastian Vettl and Max Verstappen did -- dudes went with medium-compound.

It was 'way too early to do so. The tires were graining -- that's when the surface tears and weakens grip -- and their drivers were forced to battle understeering the rest of the way.

Hamilton said afterward that this was the hardest race he's ever run.

Given the tire situation, it's easy to understand why.

Hamilton's performance was one that Nikki Lauda woulda greatly appreciated.

One minor breakthrough for the rest of the field was Vettel's taking second place over Bottas. Thus, someone other than a Mercedes driver has finally finished in the 1-2.

The question remains, though, as to whether any other team can actually win this season.

The odds say yes due to how daunting the task would be for one team to complete a clean sweep, but so far, it's proving to be a task.