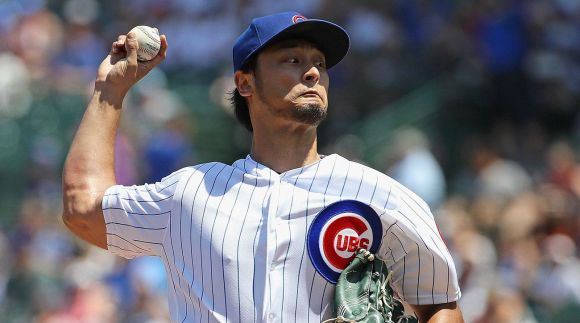 After a year and a half of injuries and an almost pathological lack of command, Yu Darvish finally seems to have gotten his shit together.

In fact, dude's been hanging out on the fringes of ace territory for the better part of two months now, something that must please the Chicago Cubs immensely.

This renaissance has also included an increase in confidence, as the Japanese-Iranian is practically swaggering these days.

Why he'll even take to the Twitter if necessary to silence anyone who dares throw shade in his general direction:

Some Chicago sports dude by the name of David Kaplan made the ill-advised decision to get after Yu after a poor start at home against the Giants.

The Cubs ultimately won this video game by the score of 12-11, but Darvish allowed six earned runs for a no-decision.

Apparently, Kaplan felt it was necessary to share his research with the masses.

We just did the research here in the studio @NBCSChicago. This season when he has any 2 strike count on a hitter, @faridyu is throwing nearly 80% off speed pitches. 3 of the HR’s he allowed tonight were with 2 strikes and those 3 all were off speed pitches. #YuTooPredictable

When Darvish got wind of this nonsense, he replied with his own data.

Which one is better choice🤔 https://t.co/gJQRZiMbJD

Yu just asked you a question.

Hmm, Kevin Pillar sure didn’t look left handed to me.

Then Yu dropped the hammer, overwhelming Kaplan with numbers.

We are talking about after two strike rihgt?
Also that pitch for Pillar was splitter.

It's somehow cordial and harsh all at once.

Kaplan had no choice but to surrender.

I have absolutely loved my pitching discussion with @faridyu. Respectful and fun. Man, I wish all athletes could have as much fun interacting as Yu does. Guy is a lot of fun. Hope we can sit down and talk soon.

Hmmm, David seems contrite all of a sudden.

Darvish decided to twist the knife one last time.

And what did Cubs skipper Joe Maddon think of all this: