Yasiel Puig the Speed Demon Puts on the Brakes 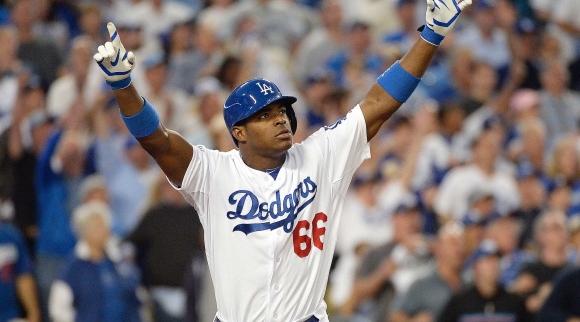 I mean, my grandfather, mind you, is 92 and he refuses to relinquish his driving privileges.

Trust me, we have done our absolute best to try to convince my grandfather that he shouldn't be driving. He's too stubborn to forfeit his driver's license and openly admit that he shouldn't be driving. My entire family has tried to intervene but we haven't been able to make any type of progress. Maybe he needs to take a page out of Yasiel Puig's book. Although I highly doubt anything that a professional athlete does will resonate with him.

Regardless of what I firmly believe that my grandfather should do, Yasiel Puig is a lot smarter than I originally gave him credit for. Given his success at such a young age, I always thought Puig was a young, brash, budding outfielder who  has the opportunity to become a megastar for the Los Angeles Dodgers.

I was mistaken when I confused confidence and élan as arrogance in this kid.

Puig, after two excessive speeding tickets, has learned his lesson. Instead of keeping his license and risking another ticket, the talented and excitable Cuban made a well-considered and logical decision. He told Dodger president Stan Kasten that he has hired his cousin to drive for him.

This actually speaks volumes about Puig's character. I wouldn't expect a young person, especially a high-profile athlete, to admit his mistakes and take corrective action.

You can say what you want about Puig's character. After two speeding tickets in less than eight months, Puig decided to call it quits until he can control his urges and drive the posted speed limit. Uncharacteristic behavior, I think, given how young Puig is.

I can't praise his actions enough. I can, however, see how he got himself into this predicament. When I was young, I thought I was invincible. Eventually, I was humbled after a few incidents and, I think, after two episodes of reckless speeding, Puig has been humbled as well.