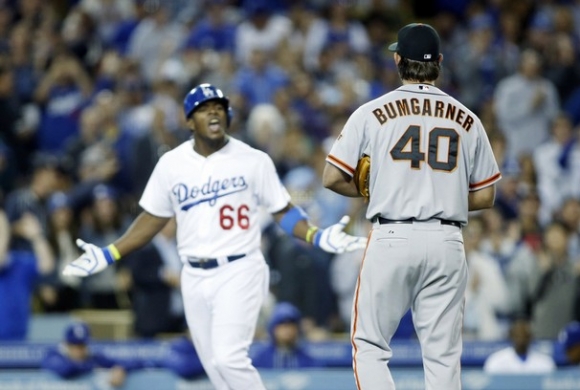 Los Angeles Dodgers outfielder Yasiel Puig is not exactly shy about expressing himself on the field.

In a recent game against the San Francisco Giants, the exuberant Cuban provided yet another fun example of his talent and showmanship.

Puig blasted a homer to dead center off Madison Bumgarner and then proceeded to execute his patented bat flip, followed by a leisurely stroll around the bases. When Puig finally rounded third and headed home, he found Bumgarner lurking nearby, waiting to engage in spirited dialogue with the Dodgers’ outfielder.

Clearly, there was some animosity present in that exchange. However, after the game, both players were going out of their way to suggest otherwise, with amusing results. Here is Bumgarner, tongue planted firmly in cheek, discussing Puig:

"Oh, I mean, I was just congratulating him," Bumgarner explained. "That was a really good swing. I don't know why everybody got mad. That was impressive."

When pressed further, the lefty committed fully to the material:

"No," he said. "I was just congratulating him. A really good hit. Again, I don't know why everybody got so mad. It escalated really quickly. I think he said, 'Thank you.' I don't speak Spanish, though."

Meanwhile, Puig was also playing it off as nothing, although his response was perhaps unintentionally humorous:

"It surprised me a little bit that he was there after I hit the home run," Puig explained, "but it seemed that I may have done something he didn't like. It's just part of the game."

Giants’ catcher Buster Posey was also involved in this fun theater, and both he and Bumgarner quite obviously took exception to both the bat flip and the methodical trot around the bases, which was actually more of a walk at the beginning and the end.

It should be pointed out that this was more or less a typical Puig home run experience, but clearly, the talented Cuban has raised the ire of many across MLB and will continue to do so.

We do have a few more of these Giants and Dodgers tussles to look forward to as the season progresses, and since both sides clearly disagree on a number of issues, these madcap antics should continue indefinitely.