Without The Captain, Who Can Lead the Yankees? 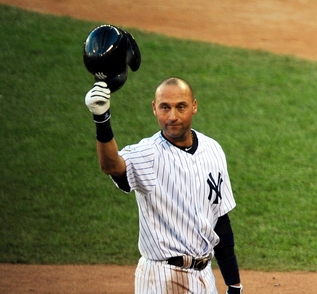 With love from the entire North American continent and some points beyond, Derek Jeter completed his career in 2014.

Despite the storybook ending that was his final game in Yankee Stadium, the season as a whole didn't exactly go as he would've hoped.

The New York Yankees were without playoff ball for the second time in as many years.

Ranking 20th in the MLB in runs scored in 2014 -- 13th in the AL --the Bombers belied their moniker by not producing runs, despite an excellent pitching staff.

And while one last World Series championship would've been the icing on the Jeet-cake, The Captain walked into the sunset with a truly remarkable MLB career behind him.

Offensively, you wouldn't even think it's the same team. The Yankees now hold second place in runs scored this season behind those mashaholic Blue Jays and are two games behind the Rays in the division. Not exactly where they'd like to be, but they're showing much more potential than last year.

The only problem, aside from some spotty pitching, is consistency.

After a rough start, the Yanks donned their mustaches and started winning. They didn't stick around, however, as New York wound up in a losing streak that left them barely clinging to the top of the division. Time and time again, they've found themselves red hot, and then they're losing to the worst teams in baseball. Clearly the talent and run support is there, they just need to figure out how to sync up enough to stay on top.

The other thing they lack this year is a true team leader.

The Yankees were been fortunate to have The Captain in the locker room each and every day to drive the team to work together and get wins. Without this presence, however, this team is prone to be inconsistent.

While none of us would expect -- or want -- the Yankees to select a new captain, there does need to be a clear leader.

With consistency being the issue, then, the Yankees should begin looking at their most stable players to lead them into victory. My personal choice would be none other than ... drum roll ...

Batting .290 on the year, Brett Gardner leads the active Yankees roster in batting average, runs, and stolen bases. Add that to incredible defense and some clutch power, and he's a solid all around player.

Aside from that, he's healthy. In a team that seems to always be riddled with injuries, Gardner's managed to stay in the game with only minor bumps and bruises along the way. He's home grown in the Yankee system and is living proof that farm-developed players is not a thing of the past.

Gardner is the consistent player that the Yankees need, and he has a passion and drive to win.

If Brett Gardner were to fully step into a leadership role, he has the potential to get them together and start making an impact on the standings. And he'll always be the one to dump the Gatorade.