Published on 25-Mar-2013 by Xavier McSpaniel 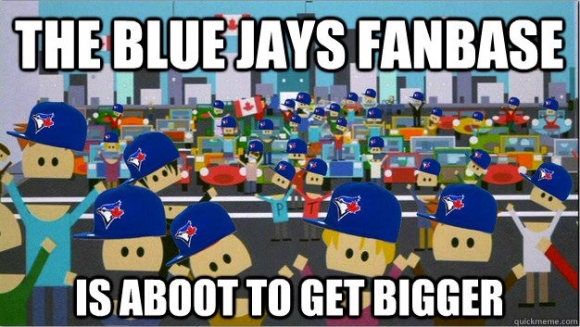 Bovada, along with most other betting agencies, feel the 437 changes the Toronto Blue Jays wrought upon their roster in the offseason elevates them to frontrunner status this MLB go-round.

What they haven't foreseen is that calamity is bound to befoul this team of destiny. Specifically, three strikes will sentence this team to a subpar, .500 or thereabouts record and see GM Alex Anthopoulos follow his first major league employer, the Montreal Expos, into oblivion. In no particular order of chronology or importance, they are:

1. The Marlins-turned-Jays will turn back into Marlins.

It's been said before, it will be said again: beyond the salary-dump and the mental health issues of Marlins owner Jeffrey Loria, there are reasons these guys were traded. To automatically assume the Great White North's clean air and deferential disposition and health care for everyone will cure all that ails the former Marlins (should they be called Marlouts?) is folly. José Reyes will have bad knees and bitch please, Josh Johnson will have Tommy John surgery on his non-pitching arm, and Mark Buehrle will not audition for 'Cocoon 3'. Book it.

2. RA Dickey will leave the team in July to build a soup kitchen for the Houston Astros.

The Cy Young knuckleballer's humanitarian efforts are well-documented. So, how on earth will he be able to stay away from the biggest disaster area in the majors? He won't. And while his heart and toil will be appreciated by all suffering from 'Stros disease, it will see his own club end up somewhere east of Mumbai.

3. José Bautista's arms will fly off mid-swing at the All-Star Home Run Derby, putting him out for the season.

To the best of our knowledge, José Bautista is not on steroids (although his sponsorship by 'Booster Juice' has to be some sort of red flag). The eye-test backs it up: Joey Bats is not built like Bonds; he gets his power from superb timing and a natural hands-speed virtually unparallelled in the game. Regrettably, as per last year, his body will fall victim to that warp-like velocity. Tommy Lasorda will need to be on limb alert.

Three strikes to bring on the Toront-Oh Noes.

Bovada: if you have any foresight, you will adjust your futures and prop menus accordingly.