Published on 3-May-2017 by Alan Adamsson 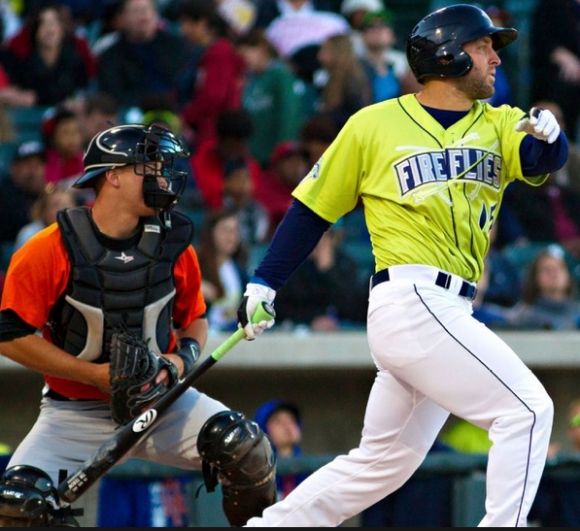 So here it is, early May, which means an entire Class A team has had those magical 5-20 minutes with Tim Tebow.

The Columbia Fireflies are only 3½ games off the pace in the Sally League's Southern Division, so maybe they do feel better for it.

Dudes were mobbing His Wholesomeness last night, though, as he strolled home to formalize a bases-loaded walkoff walk and secure a 2-1 victory over the Delmarva Shorebirds.

Well, what the hell heck, anything that wins in the last inning anymore is a walkoff. Thanks, Eck.

Anyway, Tebow was 0-2 for the night, but that keen eye that so often betrayed his downfield reads in another sport served him well in this one. He walked to spark this fateful rally, even though there was no water between home and first.

See? All you gotta do is believe.

And at the ripe old baseball age of 29, Tebow still believes he can advance past Class A.

Dude is getting the hang of things. Here he is, figuring prominently in this 5-0 win over the Asheville Tourists on Wed 26 Apr:

Keep in mind, the average player's age in A-ball is 23-24. Tebow's still got a lotta catching up to do.

But he's giving it the ol' college try, which in his case, is much better than the ol' NFL try.

The Sally League's loving it. Dude's been a predictable box-office boon for its members.

Suffice to say, those teams will tell you the 5-20 magical minutes are real.