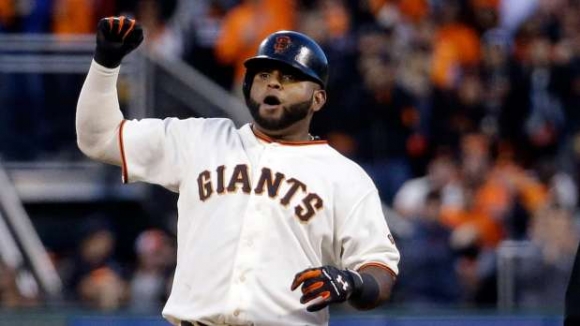 One of the dozen players who refused their current team's qualifying offer today was none other than Pablo Sandoval.

Assuming the San Francisco Giants have a prayer of procuring the loot to re-acquire the potent playoff bat of the Panda --who is the presumed bell of the ball during the annual rite of free agent bidding wars-- the Giants brass expressed their intent to keep him in the fold. One of the World Series champions' most esteemed players -- proclaimed far and wide as the best third basemen available -- the Orange & Black's front office is seeking to re-sign him before he is grabbed by some other MLB franchise.

Sandoval promises to pull no punches in putting the pinch on ownership's wallet. He's so supremely confident of his star power, he's already turned down two offers by the Giants for compensation that most of the club's fans -- who helped to elevate him where he stands today -- can only fantasize about.

If there ever was a team that sought to bring sanity into the dosh baseball's fans fork over to attend a game at one of today's major league diamonds, it's the Giants. They're a club that eschews indulging spoiled superstars with short shelf-lives. Instead, they've initiated bold new pricing strategies like dollar soft drinks and hot dogs.

Oh, what a grand day for the fleeting fields of dreams for the followers of our National Pastime.

Still, G-fans are hopeful that Pablo doesn't decide to take that free agent cruise away from the City by the Bay that made him what he is today.