The Traditional Clearing of the Benches 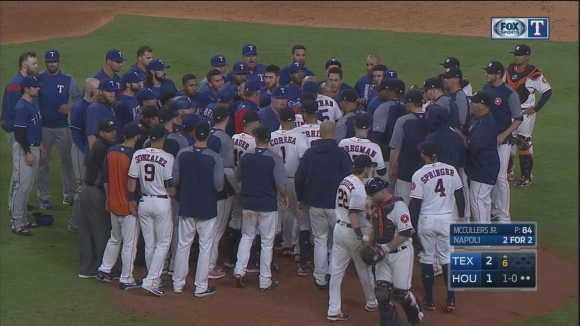 Occasionally, there are actual punches thrown, but they usually consist of a poorly choreographed dance.

Recently in Houston, we were treated to one of the latter.

Andrew Cashner of the Texas Rangers hit not one, but two Astros on the elbow with inside pitches early in the game.

Then, in the sixth inning, this happened:

This could be a controversial take, but Lance McCullers may very well have done that on purpose.

Of course, this triggered the standard bench clearing waltz, which also included the respective bullpens emptying out, as well.

As per usual, this produced a couple of shoves and a few vulgarities, just for appearances.

Napoli had homered off of McCullers earlier in the game, so there's that.

But it was Cashner who started the fun with his inside pitching, a fact that exactly nobody could have predicted.

The Rangers and Astros have developed a nifty little rivalry in recent years, so this latest skirmish will no doubt sow even more seeds of discontent.

If we're lucky, Walker will dispense some fictional Ranger justice next time.