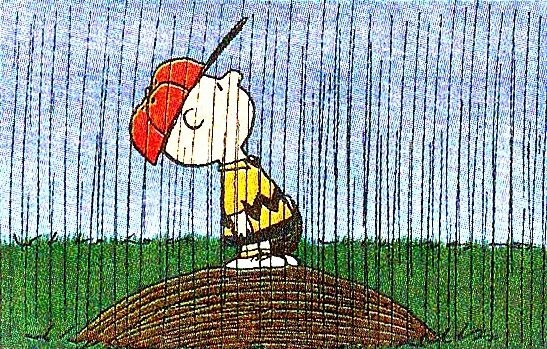 There are stars out every evening.

Too many to count in the sky, but let's focus on the ones on the diamond this afternoon.

Your favorite Shot Dude is back with some stars from MLB to construct a killer fantasy squad around.

There are 10 daytime games, but six could rain out. Let's let our opponents make the mistake of taking players from those. To view all of today's matchups, consult the Bovada data tool on our Home page: Why choose FanDuel for fantasy games?

I'm fond of their Early Only offerings today, which is where I created this lineup:

JA Happ, Toronto ($8400) ... is the best pitcher available from the six going in the Early Only set. Dude's only had one bad start this season, but it was against Tampa Bay in his last outing. I expect a bounce-back performance today against the punchless Twins.

Russell Martin, Toronto ($2100) ... is a value player who has just as good a chance at success as the higher-priced catchers available. I'll save some salary space with this dude to fit in the best Blue Jay hitters. Plus, Russell the Muscle does have hits in his last three games.

Edwin Encarnación, Toronto ($4100) ... is one of those best Blue Jay hitters I mentioned. Dude's had 8 hits, including 3 homers in his last 8 games alone. Although his batting average isn't the highest, Encarnación has 9 homers and 32 RBI in 44 games so far.

Brett Lawrie, Chicago White Sox ($2900) ... is the second sacker I'm rolling with, due to very limited options. I never like to take players facing my starting pitcher, but today, that only leaves other second basemen possibly racing a rainout. Let's hope Lawrie comes through with a few hits to make me look smart.

Josh Donaldson, Toronto ($3700) ... had a great game against these same Twins yesterday. Dude's fantasy score was over 28 points, primarily due to his double, homer and two RBIs. That gives him 10 homes and 36 runs scored in just 43 games. At this pace, Donaldson might just repeat as American League MVP.

Alcides Escobar, Kansas City ($3000) ... is the speedy leadoff man for the Royals and has swiped 10 bags thus far. With 47 hits and 8 walks, dude's always setting himself up to steal bases. I'll wager he gets at least one more today against the White Sox and starter Miguel González.

José Bautista, Toronto ($4200) ... is currently the hottest of all the Blue Jays I like today. With 9 walks and 10 hits in his last 9 games, dude's been Toronto's main sparkplug. That's what manager John Gibbons must've realized when he recently moved Mr Bats to the leadoff spot. The Jays hope to win their third straight game today.

Lorenzo Cain, Kansas City ($3300) ... seems to do a little bit of everything for the Royals these days. Dude's scored 20 runs, driven in 21, stolen 5 bases and hit 5 homers. Batting third is a prime spot in the order, and Cain has clearly taken advantage of it. Look for him to also take advantage of González, who's surrendered 8 walks in his last 10 innings of work.

Melky Cabrera, Chicago White Sox ($2900) ... has been slashing, with 5 multi-hit games in his last 9 games. Cabrera has lifted his average to .299 and walked 17 times in 42 games for the first-place White Sox. Dude's hitting in the five-hole today against Kansas City starter Danny Duffy.

Your favorite Shot Dude hopes you re-visit our site every day. Look both ways before crossing the street, and always give it your best shot!