The Re-Redemption of Josh Hamilton 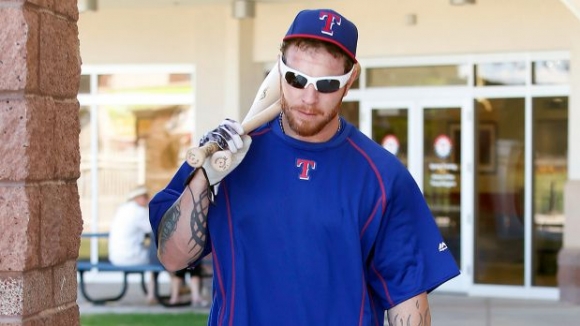 Josh Hamilton is no stranger to the redemption story.

The 34-year-old slugger has lived of a life of peaks and valleys, from being a homeless cocaine addict to becoming an MLB star.

The lowest point in Hamilton’s life came during the early 2000’s, when he tried to commit suicide due to an inability to control his cocaine addiction. But he'd recover and capture the heart of American’s during the 2008 Home Run Derby.

Hamilton was a star with the Texas Rangers, being voted into five straight All-Star Games and was even crowned American League MVP in 2010. He'd later leave the Rangers in 2012 by signing a five-year, $125million deal with the Los Angeles Angels of Anaheim.

Life was finally on the upswing.

But LA proved to be far from glamorous, as he was unable to replicate the numbers from his Rangers days. Hamilton’s Angel career reached its low point during the 2014 playoffs, when fans booed the highly-paid star when he couldn't register a single hit during the American League Division Series.

Then, of course, news broke in February that Hamilton had relapsed. He'd experienced this with alcohol on two separate occasions -- 2009 and 2012 -- and admitted to this one that involved both alcohol and cocaine.

He avoided a possible suspension due to the findings of an independent arbiter, who stated that Hamilton fully complied with the league’s substance abuse policy.

By then, though, the relationship between Hamilton and Angels management had soured beyond a point of repair, and rumors began to arise that the Angels were looking to deal him.

In late April, news broke that the Halos had agreed to trade Hamilton back to the Rangers for cash considerations or a player to be named later. In addition to receiving nothing of any real value in return, the Angels agreed to eat a significant portion of the $80 million remaining on Hamilton’s contract.

At least he was going back home. Back to the place where he was a seen as a star, and not an overpaid slacker.

Hamilton returned on 25 May against the Cleveland Indians after finishing his recovery from shoulder surgery.

The next test would come when Texas came home to play the Red Sox. How would the former Rangers star be received by the fans who -- not three years prior -- he had spurned to go to Los Angeles?

In his first at-bat, the Ranger faithful would make sure their admiration for him was known, as the former MVP was given a standing ovation.

Hamilton would later treat Ranger fans to a show in the following game, when he crushed two home runs against the Rose Hose:

Then, yesterday, in the series' final game, Hamilton came up big in the clutch, hitting a walk-off double in the bottom of the ninth to give his team a 4-3 victory.

Clearly, dude's found a home there, a place that accepts him for who he is. He may never be fully able to defeat his demons, but he accepts them and tries his hardest to better himself.

Rangers fans have shown they're behind the man who best represents that idea that it’s never too late to start anew. That once you fall, you can always get back up.

And while he may have his detractors, Josh Hamilton has proven himself worthy of re-redemption back in Texas.