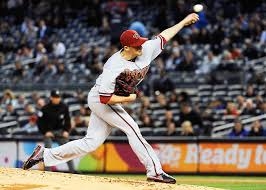 The Arizona Diamondbacks open a three-game series with the Colorado Rockies tonight at Coors Field and bring with them likely the best pitcher that nobody has heard of.

Patrick Corbin (6-0; 1.52 ERA) takes the hill for the Diamondbacks sporting the third-lowest ERA in the majors. He'll be pitching at a Coors Field venue that's been known in the past for leaving fans drunk on runs ... but not tonight.

Just check out the Bovada data tool on the Home page and you'll see some of the numbers that prove the point. There, you'll see that in his last three starts, opponents have scored a combined two runs. Also, there are his last two starts to consider against the Rockies, where Corbin has gone a combined 15 innings while yielding just 3 runs. They're the kind of numbers that lead you to jump on the under (especially when the total is a lofty 9½ according to Bovada), and that's just what we're going to do.

More backing for the playing the 'low' is in the fact that 8 of Arizona's last 11 have gone under, as well as 8 of their last 9 against the Rockies. In those last nine betweem the two teams, they are averaging barely over 6 runs per contest.

Corbin will oppose Jon Garland (3-4; 4.89) whose numbers are very average at best this season (and that might be putting it nicely). But his numbers against Arizona (for whom he used to pitch) look much better. In his last four starts against the D'backs, Garland is 1-2 with an ERA of 2.25.

Coors Field doesn't often play like the match-box it used to, and there's rain in the forecast in Denver that could help pitchers even more. But thin or thick air, rain or shine, this is a series that has few signs tonight's game will be a slugfest ... and certainly not with the bat-stifling Corbin on the hill. Don't be surprised if this total stays about as low as a snake's belly, and a long way below the 9½.