Published on 4-Aug-2018 by Alan Adamsson 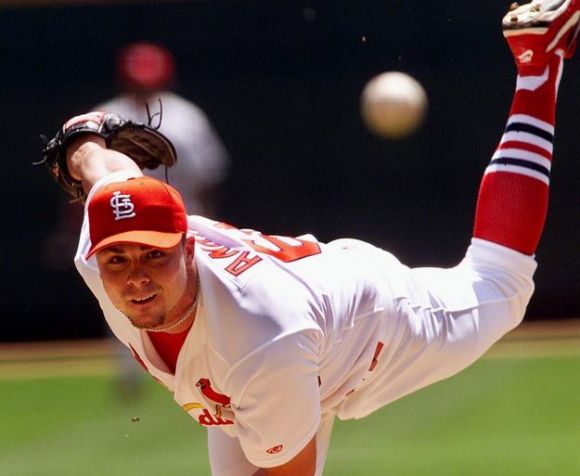 With Matt Holliday in the Rockies' system again, it seems a couple of ghosts from Cardinals past are everywhere these days.

More accurately, they're trying to be.

Ironically, the dude who's a longer shot at making an impact might just be the more successful.

There's never been any doubt that Rick Ankiel has a major-league arm, even after his pitching stint yipped out.

The lefty's starting to think he can deal in The Show again.

What could have possibly made Ankiel think he could realistically do it?

Gotta go back to something that happened last season to discover the sparks that started the fire. That's when Adam LaRoche got the idea of calling a few buds, forming a team of retired pros to compete in the National Baseball Congress World Series.

Chipper Jones will get zero argument that it's a long way to the top if you wanna rock-&-roll.

Apparently, though, a few who've been there believe they can get back.

Maybe it's because Bartolo Colón is still pitching.

Anyway, Louisville Slugger was impressed enough with reaction to that OG MLB team in Wichita that it decided to duplicate the format.

Thus, the first-ever Bluegrass World Series featured an OG MLB team of its own, and Ankiel found himself on the mound for one batter:

Former @Cardinals Rick Ankiel strikes out the only batter he faced tonight. Cool to see him back on the mound. 🔥

Dude obviously knew that going 2-4 against that opposition was a dead end at higher levels, but hell, his arm had 15 years of rest since his most infamous yippified outing in the 2000 NLDS:

If he's overcome the mental blocks -- and since he didn't kill that hitter, it seems he has -- why not think big?

After all, dude re-made himself as a hitter, did his time in the minors, reached MLB, and spent seven seasons as a serviceable outfielder with a cannon arm.

Maybe dude should just pitch from out there.

Ankiel only clocked around 85mph at the Bluegrass, but odds are he didn't train much for a short outing. Besides, he was known more for his Steve Carlton-type curve.

He's 39 now. His arm's devoid of wear and tear. If he convinces himself he can get his body in shape and has the mental stamina to last a campaign, Ankiel would probably think he could help a team. Stay tuned.