Previous Egregious Disgrace Strain: The Real Injury Keeping A-Rod Out of The Show

Published on 24-Jul-2013 by Xavier McSpaniel 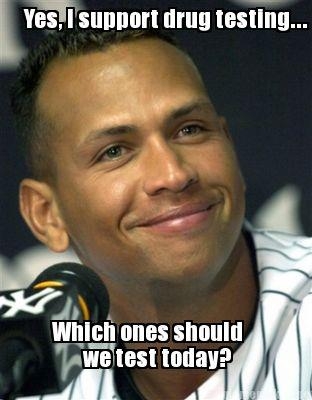 The second opinion Alex Rodriguez obtained yesterday on his troublesome quad injury implied a pair of ergos: 'El Mucho Contracto' is perfectly healthy; and the Yankees prefer insurance money over a pennant chase.

MLB's most successful franchise, however, is denying any subterfuge.

"Yes, his quad is fine," said a source who wished only to be identified by the moniker 'Like a Bosch.' "Alex has a completely different injury requiring further rest and rehab.

"He's got a Previous Egregious Disgrace strain ... PEDs, as we medical professionals like to call it.

According to the Bud Selig Journal of Healthy Baseball, the PED is a small ugly muscle in the vicinity of the colon that, until recent days, had been periodically concealed. Of late, though, it has become more and more exposed; when completely out in the open, an athlete is prone to significant strain and will experience symptoms such as delusion, hypocrisy, and an irrational loathing of Fed-Ex.

"Alex has these symptoms -- indeed, he's displayed them for many years now -- so we're not taking any chances.

"He's too valuable as a claim ... errr, asset to this ballclub."

It is unclear how many additional opinions Alex Rodriguez will seek to prove his readiness for a return to the Pin-Stripes. Revelations of the true nature of his injury, though, should ensure he remains unfit to take the field in the foreseeable future.