Pineda Mows O's by the Bushel 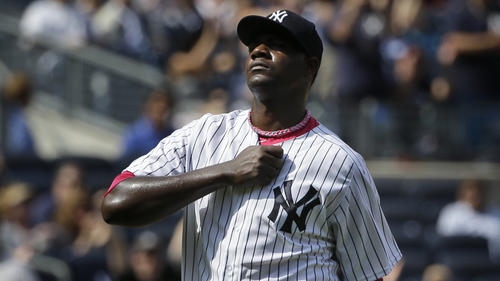 That'd conjure thoughts of a perfect season for any NFL team.

This time, though, it meant a near-perfect pitching day for Michael Pineda, who really K'd the O's.

16 strikeouts and no walks. When was the last time you saw a performance like that? And against a pretty solid Orioles offense, too.

Pineda is now the American League leader in strikeouts, at 54, and has dominated his way to a perfect 5-0 record this season.

Why can't any of his success rub off onto CC Sabathia?

Dude finally broke through tonight against Tampa Bay. Five home runs worth of support can do that for a pitcher.

Back to the bright side of New York's rotation.

Pineda had a record in reach during his outing. He was at 111 pitches and is well-known for his inability to make it through an entire season. He's an injury waiting to happen. But he only needed two more punchies to tie the Yankees' single-game record. That belongs to Louisiana Lightning: Ron Guidry had 18 K's back in 1978.

37 years is a long time for a record to stand nowadays. No idea how Guidry would've felt getting his record broken. At 64 and still enjoying the financial rewards of his career, dude's probably turned the page on that one, anyway, and he's got two World Series rings to gaze upon.

Besides, Guidry set the record 11 years before Pineda was even born.

New York needs to see more performances like this out of Pineda. Sabathia doesn't look like much of anything this year, and injuries have already claimed Masahiro Tanaka this season

Michael Pineda is the hero this city needs.