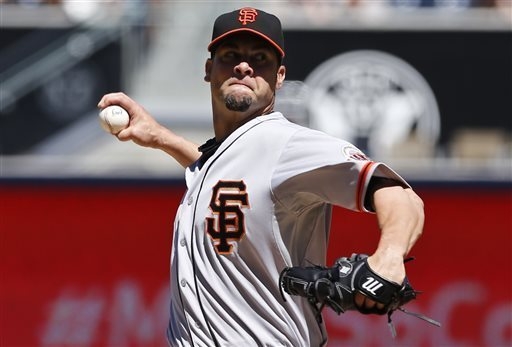 As Buster Posey grounded out in the Giants top of the eighth inning on a gorgeous late summer sunny Sunday afternoon at Petco Park, the chances for any late-season, late-inning heroics appeared to be slip sliding away for the Orange & Black.

They're not going to catch the Los Angeles Dodgers for the NL West lead.

More immediately, the bottom of the inning made it all-too-apparent that the San Franciscans also realized that resistance was futile against a San Diego Padres team that has had their way with the former wild card shoo-ins during this critical late season match up of division rivals.

Savvy G-fans could discern that their heroes had basically

thrown in the towel on this one when they installed a reliever boasting an ERA in the tens -- Bochy's kid, Brett -- on the mound.

But the joke this time was on the naysayers, as the kid made poppa proud by posting a desperately needed zero by the bullpen in what was yet again too little, too late. Nonetheless, it was one of the few bright spots on the day for the visitors.

The Giants' titanic struggle to not wimp out at the last minute of a moderately successful 2014 baseball season showed no signs of improvement during a road trip where their pitching staff turned to crispy cream.

Looking back to earlier in the week, former Giant Rich Aurilia as much as predicted where the Orange-&-Black were going to be at the end of the weekend and how they had best re-arrange their priorities:

If only San Francisco had Washington's problems.

Meanwhile, back at Petco on this fateful Sunday, George Kontos was called to calm the relentless bats of the Padres. The San Diego club -- tired of looking up at the better-financed franchises of the Giants and Dodgers that sandwiched them in geographically and hemmed them in baseball-wise -- played the Giants like a team that wanted to thrust them from their lofty perch as the semi-preferred wild card pretenders.

Frankly, only the Brewers' late season collapse of greater magnitude is keeping this team in the race for a playoff position.