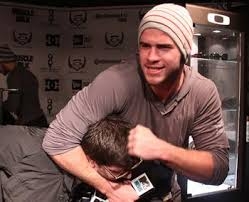 Baseball's World Series champs have been incurring their share of concussions this season.

If there was ever an award for Irony in Injury, then that would certainly be awarded to San Francisco Giants first baseman Brandon Belt.

Talk about what goes around comes around! Dude must be feeling déjà vu all over again. With his misplaced throw that accidentally bonked Gregor Blanco on the beanie, the Giants are becoming the game's poster children for concussions.

At least they have brains to be concussed. In other cases, that point is debatable.

Of course, moves have been made to shore up evaluation procedures for concussions. But at some point, there's only so far an organization can go.

With the hubbub over NFL concussions seemingly in abeyance, what measures could still be taken from this Giant concussion outbreak?

Nolan Ryan has time on his hands these days, so why not?

Gotta think outside the box. Apparently.