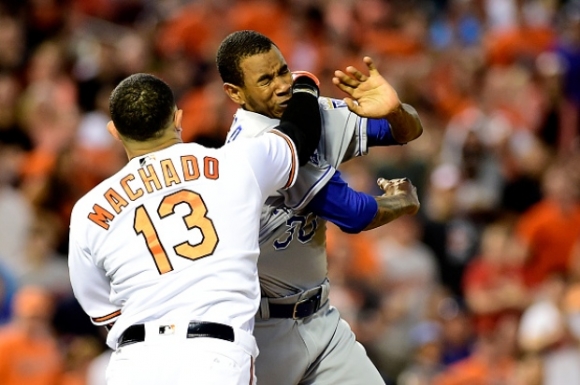 The Stanley Cup playoffs are in full swing.

And yet, there haven't been as many human-on-human full swings as MLB has featured.

The latest bout was as much of a snot-knocker as the first one, featuring the right jab of Texas Ranger Rougned Odor and the solid chin of José Bautista.

Perhaps it signaled the end of the benches-clearing posefests of days gone by.

This one had a shorter fuse than Odor-Bautista.

Tue 7 Jun wasn't looking any better for the Kansas City Royals than the previous four days, when they were in the process of getting swept by Cleveland. Ventura had gone six strong in that series' opener and then watched the bullpen blow it to start what's become a tailspin.

So what's a staff stopper to do when it isn't happening for him?

Well, it didn't wake up the team. Maybe because this isn't hockey. There are no designated moments of reflection in a penalty box.

Nope. In baseball, it's kinda hard for others to join in when the next step is a suspension. And that hammer came down today:

And this sort of scenario isn't exactly new to Ventura:

The Orioles sensed a pattern.

Not that Machado's a saint. When he faced a little chin music against Oakland two years ago, his bat managed to get helicoptered toward the Athletics' third-base dugout shortly afterward.

That was worth five games.

Maybe Ventura was fortunate to get outta the South Side a couple of years ago.

And maybe Machado saw The Untouchables one too many times.

Now, no one's gonna see either of them for a minute.

That's where hockey has this fight thing figured out. You won't see any NHL players throwing down when there's too much to lose.