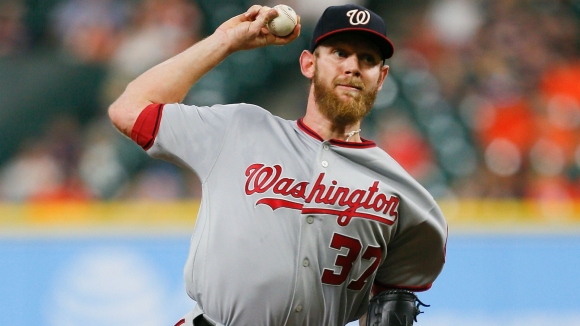 While others were openly questioning Stephen Strasburg's intestinal fortitude, the Washington Nationals were simply concerned with his intestines.

And other connected organs.

The Nats' ace had apparently begged off his Game 4 start before its scheduled start on Tue 10 Oct.

The rainout changed everything. Starting pitchers, especially, will say it's amazing what the body can do with an extra day's rest.

Strasburg no doubt was aware of the slings and arrows that he wasn't a gamer when the rubber met the road.

This and his Game 1 performance put Strasburg in conversations with the legendary Bob Gibson.

Dude became the first NL slinger since the Cardinal ace in 1968 to fan 10 or more batters on multiple occasions in the same playoff series.

Damn. Old School umps knew how to punch somebody out!

Anyway, in his two starts this series, the 2009 draft's first overall pick outta San Diego State Aztec is reaping dividends on the tank job Washington did to get him:

Given the Cubs' firepower, that's nothing short of awesome.

Strasburg still took the loss in Game 1 -- because Kyle Hendricks -- and he had little margin for error in Game 4.

The only run he had in support came from an Addison Russell fielding error on a short hop that allowed Trea Turner to score from third. Seems like the leadoff-hitting shortstop picked the right time to get on base for the first time this series.

Chicago starter Jake Arietta was masterful, too. Dude was only done in by the Russell error and was pulled due to a high pitch count.

That brought on Jon Lester in a continuing trend of starters becoming relievers in playoff series.

Noted for his dislike of throwing over to first base, the southpaw showed it wasn't because he couldn't:

Washington skipper wasn't inclined to relieve Strasburg, pitch count or no, until the Nats found a way to jam the sacks in the eighth.

Oppo. Against the wind, even.

Dude just went from hod-carrier to main man in one swing.