MLB's Winners at the Break 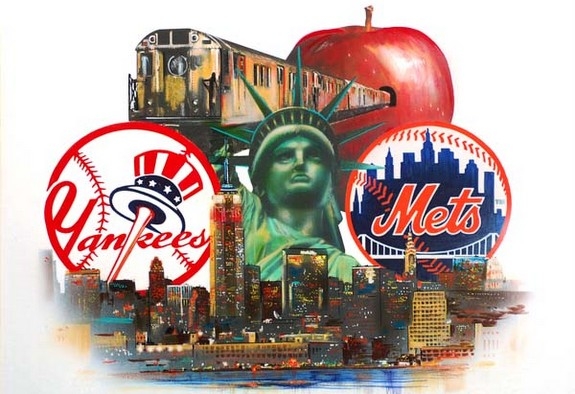 We've reached the mythical halfway point of the Major League Baseball season -- close enough, but they've all played 86-91 games -- and we've seen a bunch of surpises, some disappointments, and a shipload of great plays.

We've identified a few of the big winners at the break. Really.

Faced with eiher high or low projections, these are the ones who have met their expectations and even gone beyond:

The Big Apple in general should feel like winners at the halfway point. Neither the Yankees nor the Mets were expected to do much this season. Both teams had a heap of question marks, and do date, they've produced positive answers.

The Yankees go into the break with a 3½-game lead over the Tampa Bay Rays and are likely the strongest team in a sketchy division, from what anyone can tell. The pitching can be spotty, but when they're on, they've the potential to be one of the best rotations in the league. Pair the starters with the best end-game bullpen in the league -- Dellin Betances and Andrew Miller -- and it's a staff that you don't want to mess with.

Both Gotham rosters were littered with injury risks coming into 2015, but luckily, the injury bug didn't quite strike as expected.

The Yankees lost Masahiro Tanaka, Andrew Miller, and Jacoby Ellsbury for a stint, but were able to fight past the losses and play well without them. The Mets, to no one's surprise, lost David Wright for the first half already. On top of that, catcher Travis d'Arnaud has been in and out of the lineup and standout rookie pitcher Steve Matz tore a lat in his third game. Aside from that, they've been in sufficiently solid shape to contend.

The Mets are probably the bigger surprise here. They're only two games behind the division leading -- and World Series favorite -- Washington Nationals, all while being 28th in the league in runs scored. You could say the Mets have a World Series-caliber rotation and a AAA-level lineup. Being a Mets fan can be rough sometimes.

The Yankees and Mets were both predicted to finish around .500 by the oddsmakers in Vegas, and ... well ...  I knew I should have bet the over!

At the plate, Bryce Harper has to be the biggest winner so far this year. Ever since he came into the league, he's been dwelling under the shadow of Mike Trout. This year, dude's finally stepped up and shown what he can do, albeit while causing a little harm to himself.

Harper's still just 22, but he had lofty expectations after being a No 1 overall pick. Before this season, his career-high numbers were .274, 22 bombs, and 59 RBIs. This time around, he's already blown past each of those marks, compiling an impressive set of .339, 26, and 61.

His emergence has been key to the Nationals success this season, seeing as he leads the team in average, home runs, runs scored, RBIs, walks, OBP, and slugging. Harper also has the highest WAR -- wins-above-replacement -- in the league, grabbing the Nationals an extra 6.2 games. He's definitley a favorite to win the MVP to this point, but of course, the dog days await.

As pitchers go, Oakland's young ace may not be the biggest surprise in the league. He did have a solid season in 2014 with 14 wins and a 3.08 ERA. But this year, his Athletics are dwelling in the AL West cellar, and he's responded in the best way possible. While playing for a last-place team, Gray's managed to post a 10-3 record with an American League-leading 2.04 ERA and a WHIP under one.

Dude's responsible for a quarter of his teams wins, but he isn't getting the recognition he deserves and probably won't unless Billy Beane's belief that  they're due to climb back into the race is correct. The next best pitcher in the American League is the Astros' Dallas Keuchel, and Gray should have the edge over him if it came down to Cy Young voting at the halfway point.

Fair or not, a team's performance matters when it comes to post-season individual rewards, so -- even if Gray keeps it up -- the Cy Young will probably go to the next-man-up if Oakland continues to sputter. Chris Sale would be an honorable mention in that respect, considering his MLB record of eight consecutive games with ten strikeouts or more.

But it's what's damn good in August and September that'll carry the day.