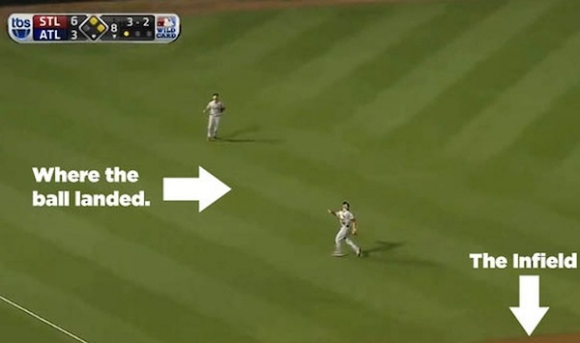 I know it's a little early to be talking about MLB playoffs, but fear not, I won't be making any predictions in this article other than the to say that the Miami Marlins will be watching the playoffs this October from their couches.

That is, if their players can afford cable on Miami's surprisingly low payroll this year.

No, this article will be dedicated to covering the tragedy that is the 'expanded' MLB playoffs that began last year.

Major League Baseball announced the decision to expand the playoffs to 10 teams last March, citing the desire for more markets to experience playoff baseball each year.

That's just lovely. As an Atlanta Braves fan, please let me be the first to tell Major League Baseball how wonderful it was to experience the playoffs last season.

I'd like to thank Major League Baseball for allowing my team, which had 94 wins, to participate in a one-game playoff, basically saying that one game is more important than the entire 162-game schedule.

You can't call it a playoff. At least, I can't. It's essentially a play-in game that previously existed for teams with identical regular season records.

For those who don't remember, the Braves hosted the Cardinals last year in the NL's play-in game. After the regular season, the Cardinals were six games back of Atlanta. St Louis won the play-in game, advancing to the real playoffs against the top-seeded Nationals. You'll recall they actually won that set and took the eventual World Series Champion Giants to seven games.

Let me be clear: my point is not that the Cardinals were undeserving. St Louis won 88 games and were obviously a very good club. My point is that, in a sport where every regular season game is played as apart of a series, why should the first round of the playoffs be any different?

In the form of a first round play-in game, Major League Baseball is saying that every year, the last two teams into the playoffs will be considered to have had identical regular seasons. This is a huge disadvantage to competitive divisions like the NL East and AL East. With all due respect to the AL Central, for example, the weakness of their division is a huge advantage for every team within it.

The Detroit Tigers won the Central last year with 88 wins. That's five games behind the Rangers, who took second in their division, participated in the AL play-in game, and lost. It's two games back of the Tampa Bay Rays, who had 90 wins and yet weren't even given the opportunity to participate in a play-in game. All three Rays fans in existence know how frustrating that is.

Knowing how long it takes for things to change in this sport, I seriously doubt there will be another playoff modification any time soon, but if Major League Baseball is serious about wanting more markets to experience the playoffs, then they'll change this play-in game to at least a three-game series.