MLB Defensive Strategies: Are They Too Full of Shift? 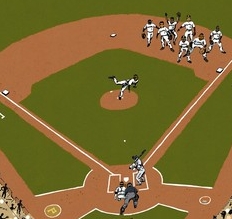 The cat-and-mouse game between batters and pitchers has never been simple.

At the very least, the professional hitter takes a long look at infield and outfield placements before he steps into the batter's box. If he sees the infield shading to his weak side, for example, it's a clue he's going to see a pitch sequence set up for heat on the outside black to provide the coup de grace for getting him out. He can thus adjust his approach accordingly.

If anyone had those fundamentals mastered, it was Tony Gwynn:

Charting became a popular method of tracking hitters decades ago, and they've become more sophisticated as technology has evolved. In recent seasons, innovative low-budget teams have taken this data to the extreme and totally tailored their entire defense to each hitter's tendencies.

And when the terms innovation and low budget are seen in the same sentence, it's talking about the Tampa Bay Rays. Yes, Billy Beane's Moneyball Oakland A's built the template, but the Rays added a few bells and whistles that have made MLB sit up and take notice.

Specifically, Tampa Bay regularly deploys defensive shifts along the infield. Some say it's the new way. The just-as-low-budget Pittsburgh Pirates began frequently implementing shifts, and they believe it was a major factor in breaking their 20-year playoff drought.

So now, teams with more mainstream philosophies are getting into the act. After their flop last season, the Phillies have nothing to lose. Even the vaunted Cardinal Way is adding a chapter.

Still, the shift is not without its critics, who make valid points:

Until something more definitive comes along, though, the shift is here to stay.