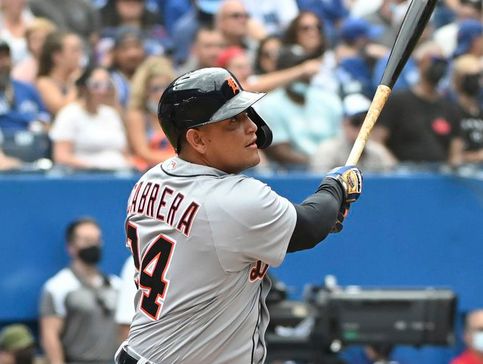 Like in Toronto, with Miguel Cabrera facing southpaw Steve Matz with a 1-1 count.

Miggy's swing looked pretty bad on a heater, so maybe Matz and battery mate Alejandro Kirk thought a hitter of Cabrera's caliber was setting them up to throw another one.

For whatever reason, they decided to go with a changeup.

The Blue Jays' game prep surely figured they had a line on Cabrera:

It seemed like every indication showed the Detroit Tiger veteran was pressing, and maybe he was.

But not on the changeup. From the moment the delivery left Matz's hand, it became clear Miggy was on it. Dude got full barrel, too:

A couple of seasons ago, this occasion was deemed inevitable. Then the years seemed to be catching up with his body, and the Covid-19 pandemic added another impediment.

Cabrera finished 2016 with 446 bombs. Since then his numbers cratered:

He found his stroke again this year, clouting 12 already to set the stage in TO.

Statcast measured Cabrera's home run at 400feet and had an exit velocity of 104.1mph.

Maybe batting average isn't trendy anymore, but still, his career .311 -- and counting -- along with the 500 bombs puts him in an even more exclusive club:

Few players have been able to maintain such a high average and reach the 500 HR mark.

Only four players in that group have a higher career average:

Yes. Yes it does.

The late Mike Ilitch, the Detroit pizza billionaire who owned the Red Wings and Tigers franchises, knew the back end of Cabrera's contract would basically be a thank you for what you've done here bonus, but his logic was understandable.

OG was rewarding Miggy for ...

He was intent on Cabrera entering the Hall of Fame in Tigers colors. That'll happen.