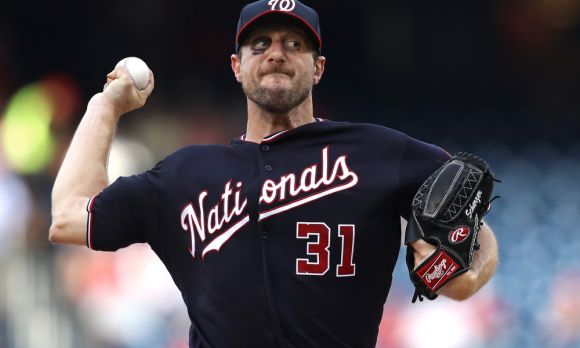 Few would argue that Max Scherzer is one of the most dominant MLB starters currently walking the Earth.

The Washington Nationals ace and complete animal recently tossed seven scoreless innings with 10 K's against the Phillies in DC.

While this stat line isn't unusual for Scherzer, the circumstances that produced it were a bit different.

You see, Mad Max had just had his face rearranged during batting practice the previous day.

We now take you to the aforementioned BP session:

Yes, that was absolutely our hero casually laying down bunts when things got very serious.

That must've hurt like hell, as the reaction and bloody towel would suggest.

Again, this gruesome scene went down the day before his scheduled start against the Phillies, so it was widely assumed he'd miss his turn.

But that's not how things work inside the Thunderdome.

The industry term for this performance would be badass.

Mad Max insists that it looks worse than it is, and we certainly hope so.

And we must point out that the genetic anomaly that causes his one blue eye combined with the facial bruising also looks pretty badass.