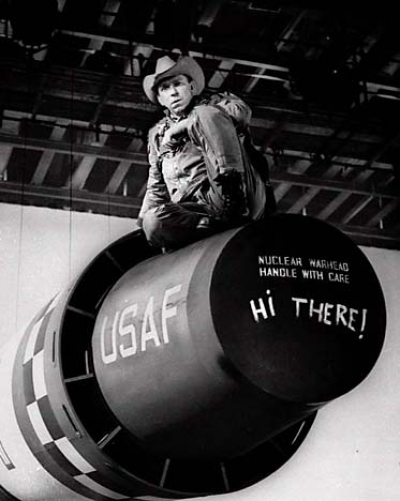 One absurdity of the Cold War was the lengths American and Soviet militaries would take to match each other to avoid any gap between arsenals, no matter how ridiculous or expensive a particular weapon was. For example, the Davy Crocket nuclear bazooka was developed by the USA and had the USSR scrambling to match it before each of them realized the delivery system was so limited in range that both sides on the battlefield would be wiped out by the blast.

Little did we know at the time, but baseball back then must have been profoundly affected by this mindset. More to the point, these were Tony LaRussa's impressionable years when he was a player in the Kansas City Athletics organization. Little did we know then, but in 1960, before the Cuban Missile Crisis was even a tear in Nikita Khruschev's eye -- manager Bob Elliott kept calling upon Leo Kiely to get a key out and then hit the showers, and the seed of a Left-Handed One Out Guy (ie- the LOOGY) was sown. It especially flowered in the fertile mind of LaRussa.

Inventors set the stage for change, but it's innovators who make change. LaRussa is one of the best innovators in sports. He popularized the concept of closers and set-up men to the point that these roles have become career paths. He has caused games to be so choreographed that, given a fair performance by a starter and a decent cadre scripted relievers, the sixth inning is often where the rubber meets the road these days.

This has occurred because virtually every other team in the game now follows the same script. Thus, there's a keen demand for the role players. That, obviously, drives up the price for personnel. Crazy salaries are now being paid for one-inning workers.

And now, the rising market has seeped into the less-than-one-inning specialist, that rare breed known as the LOOGY.

Division rival Milwaukee couldn't sit still. They've now LOOGY-ized with 35-year-old Mike Gonzalez to the tune of $2.25million for the upcoming season. If he has a comparable year to the past few, he'll be earning almost $15,000 per batter. Put that figure against, say, Dodger ace Clayton Kershaw; he's making roughly $13,000 per batter and faces many more of them.

So, if teams are willing to fork out that kind of cash for an über-specialist, the assumption is that it pencils out somehow. But a study by the Hardball Times says no, concluding that the more the market gluts, the quality of the workfoce is diminished to the point that "the LOOGY is a class of pitcher deployed in a very high proportion of high-leverage situations, but without a particularly impressive record of effectiveness."

Sooner or later, then, someone's going to have to face up the fact that too much is being spent on a nuclear bazooka.