Kris Bryant Gets Booed by Pretty Much Everyone in St Louis 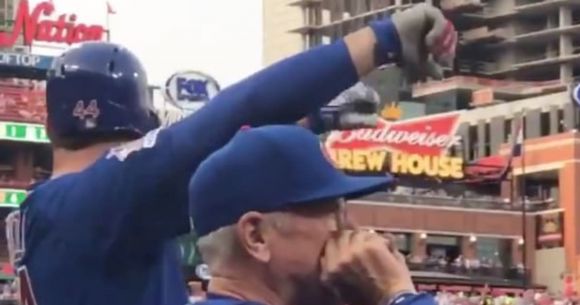 In addition to being a great ballplayer, Kris Bryant also appears to be a good dude and one hell of a model American.

However, on a recent Cubs visit to St Louis, the 2016 NL MVP was booed lustily by those kind-hearted Cardinals enthusiasts, who fancy themselves the best fans in baseball.

But what transgression could Bryant have possibly committed to raise the ire of these folks?

Based on the reaction, he must have suggested that the Cards don't play the game the right way.

Actually no, he didn't.

Apparently, this hostility can be traced back to the off-season Cubs Convention, where Bryant made a casual remark about the relative lack of excitement in the city of St Louis.

Well, the proud citizenry of this fine town refused to be impugned in such a manner.

Back visiting
Our old
Rivals
In St. Louis.
Nice that we’ve finally
Given locals something to do. pic.twitter.com/PKgbz2V5V0

Yep, that was their full-throated objection.

Sensing an opportunity to mock Cards fans even further, the Cubs dugout decided to get involved.

#Cubs having some fun in the dugout knowing what the reaction in STL would be for their guy @KrisBryant_23...👎🏻👎🏻👎🏻😂😂😂#MLB pic.twitter.com/jhrVfGypzf

For the sake of context, here is the completely innocuous statement that started all these shenanigans:

This rivalry is plenty spicy enough without having to manufacture conflict.