Japan's Two-Way Threat Has a Few Numbers to Crunch

Published on 1-Aug-2017 by Alan Adamsson 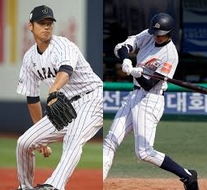 Gotta give it to the Land of the Rising Sun.

Their baseball scene sure knows how to crank out intrigue.

In no particular order, four recent examples come to mind:

What really matters is that whatever was good for 3000 MLB hits.

Suzuki's style actually harkens back to another member of the 3000 Hit Club, Stan Musial:

Now, the latest man-myth-legend to arise from Japan is touted as the next incarnation of Babe Ruth.

He's the dude who, in the World Baseball Classic preliminaries, turned the Tokyo Dome into a kinda House That Roof Broke:

That's Shohei Ohtani, current superhero for the Fighters of Nippon Ham, now found up on Hokkaido.

Not only can domed stadiums not contain him, Ohtani also holds the Japan League record for fastest pitch ever thrown:

That translates to 102mph.

Note, also, that it was barreled. Dude lined a single into right center.

Still, Ohtani's velocity and power are what made headlines in 2016, propelling into international hype that projected his move to MLB after the 2017 season and costing some lucky team shiploads of cash and possibly the deed to Delaware, New Hampshire, or something similar.

Ohtani's been hampered by injuries for most of the season, but that stuff happens. His overall body of work should make those misfortunes inconsequential.

His issue's gonna be how the world works these days:

Dude's picking up checks totalling $2.83million in Hokkaido this season, so it's not gonna be the end of the world if he remains in Japan for another season.

But if he does want to go this year, one team improved its shot with a couple of trades.

Who else? The New York Yankees.

Teams can actually trade portions of their international pool allotments, and the Bombers have picked up another $3,562,500 for their Ohtani war chest in deals with Oakland and Baltimore. That puts them at $8,312,500 in all, more than any other club can currently offer.

It's really a case of waking up rich or richer.

Valiantly, Ohtani still says he'll only go to a team that'll let him pitch and hit. If that's truly his first consideration, all the Yankees need to do is say Yes [Network], make the deal of this century, and open the tills.

Then he'll hear the ghosts of George Steinbrenner and Billy Martin crying somewhere. They'll be tears of joy.