Published on 9-Aug-2018 by Alan Adamsson 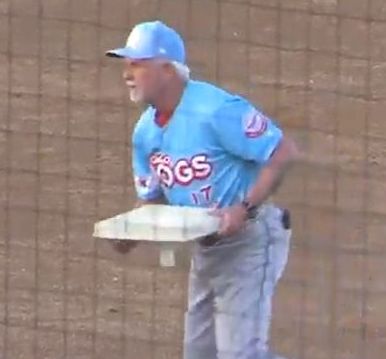 Until then and for some time after, independent baseball leagues provided a popular form of summertime entertainment in a multitude of cities.

They're not as numerous today, but Indy ball is still around in one form or another, and it's still entertaining.

Fortunately for all involved it still is.

Fargo-Moorhead, home of the American Association's Redhawks, has been Fun Central during recent days in the Ejections category.

First one of their own, Brennan Metzger, figured he got tossed on a poor premise and opted for theatrical exit:

Dude meant nothing by it except for reacting to the moment.

After all, that's baseball.

Just think. All that extra action on offer at no additional cost to the paying fan.

Giving the base to that little dude was a heartstring-tugger, too. So humanitarian.

Someone's gotta go a long way to top the Chattanooga Lookouts' then-manager Phil Wellman back in 2007.

Here's how to leave an impression after getting the hook for arguing balls and strikes:

That never gets old.

So much stuff, and capping it off with a departure through the Chattanooga Eye Center ad on the gate.