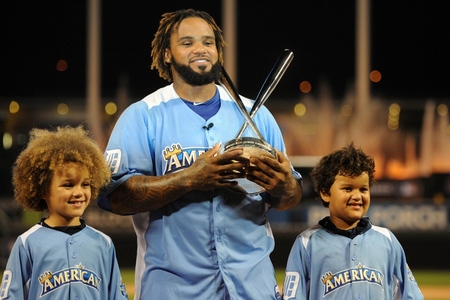 It's that time of year, just before the dog days of August settle in like a cranky toddler on the car ride home after a Mariners-Astros, 17-inning 1-0 ballgame on a school night.

We're at the All-Star break, which officially began last night after the ESPN Sunday night broadcast, featuring reasons why the likes of Yadier Molina, Allen Craig, and Carlos Beltran were selected and what was a pitching matchup of two All-Stars in Adam Wainwright and Travis Wood. This also meant that neither pitcher will be allowed to play in the All-Star game because they pitched on the Sunday before; in fact, Wainwright has already given way to St Louis closer Edward Mujica.

Tonight, fans will get treated to the annual Home Run Derby at Citi Field, where -- much like the All-Star game itself -- players are already dropping out because they care so much about the game and the fans. For example, Carlos Gonzalez has an ingrown cuticle and will be replaced by Pedro Alvarez of the Pittsburgh Pirates. Gonzalez was healthy enough to go 0-3 against Zach Greinke’s stellar two-hit, complete game shutout Saturday night, which would’ve been the top pitching performance had it not been for Tim Lincecum’s no-hitter.

Frankly, you'd expect players on the contending teams to step right up as replacements. After all, this game counts!

Baltimore Orioles slugger Chris Davis hit his MLB-best 37th bomb against the Jays in what the Broadway critics refer to as a dress rehearsal for the real show he will put on tonight. Prince Fielder of the Detroit Tigers is the defending champion, hitting 23 taters last year in Kansas City and became the first player to win the title in both leagues.

According to Vegas, here are the odds for each player to win the 2013 Home Run Derby and get that coveted photo op with Mr Met:

Notice that Yoenis Cespedes did not make the All-Star team, yet was selected for the Home Run derby. This is not unprecedented; it's happened a few times in the past but seems very odd to me. Isn’t the All-Star break supposed to be for actual All-Stars? Are dudes like this treated like bridesmaids or what?

Perhaps when David Wright was selecting players, he didn’t realize the game was going to be played in New York and not Denver, where Michael Cuddyer has hit 9 of his 15 home runs. Either the thin air of Flushing has a hitherto unrealized effect on right-handed hitters, or Wright was finally happy to find a fourth invitee to say yes.

I expect the event to be won by a left-handed batter, which bodes well for Fielder, Davis, and Bryce Harper.  Dimensions in Citi Field favor the lefties with a shorter wall, and it's only 330 feet down the right field line. I’m anxious to see what kind of show Harper displays, but let's hope he leaves the gold Nike’s at home this year.  Poor Mike Napoli was temporarily blinded when he stepped into the batter’s box in last year’s game!

I’m picking Harper to win the whole thing tonight. We'll no doubt be mesmerized by the mass of munchkins on the field trying to shag the short ones and $20 baseballs being lost forever to fans willing to shell out cash for an 'exhibition.'