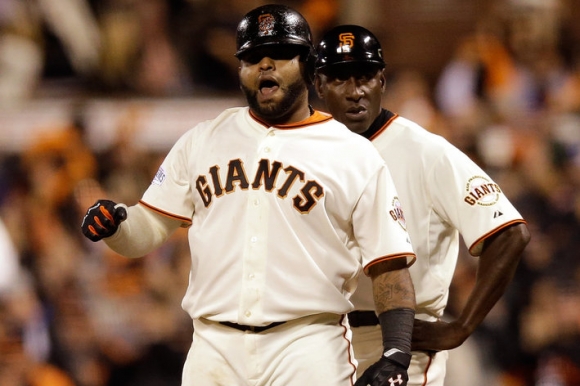 The Killer P's -- a term first created on this august website -- currently consisting of  Panik, Posey, Panda and Pence were in full predatory form in Game 4 of the 2014 World Series.

However, those who simply perused the box score would be sorely misled if they concluded that the game was a full on blowout.

It could well have been a laugher, but with the Royals doing the honors.

After the Giants scored a run in the first, for several innings thereafter, it appeared that they were going to be Yosted yet again by the Royals. A victory in Game 2 had, at the very least, assured themselves a poignant swan song to their AL Championship season in front of their blue-clad Kansas City throngs.

New Killer P's seem to be positively proliferating on the Giants like poseys in a plum parade; the defense of Juan Perez and the pitching of Petit was icing on the cake for the Orange & Black, and the cherry on the top was their thouough dismantling of the Royals' College World Series darling, Michael Finnegan.

As the young upstarts pounded an somewhat effective -- in the beginning, anyway -- Ryan Vogelsong with their peashooters, G-fans and even Bruce Bochy -- in a brief moment of October angst-- began to evision the nightmare of going down 3-games-to-1. But the Orange & Black Machine -- another coined term from The Daily Player -- sputtered to life again with a kick from the Panda, an attack of Panik, a peck or two from Posey, as well as some timely punches from Pence.

Tip for Bay-area Giants fans watching the World Series on TV: Al though it's annoying to hear about the games two pitches in advance of the video feed -- if you prefer to listen to the local KNBR Giants announcers -- when attempting to use the radio feed instead of Fox's.

Toggle back to the Fox audio just before the reliever's first pitch. Repeat for each pitching change.

The Giants themselves are no doubt doing this in the dugout.