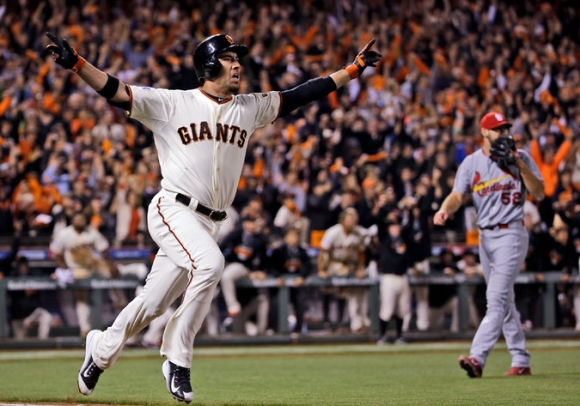 And they're ready to match their grinding style with upstart Kansas City's outta-left-field improbabilities in what could be one of the more unique Series pairings in recent times.

Contrary to popular belief, their play is more exciting than their by-the-book interviews. Part of being seasoned veterans.

Of course, some seasoned veterans can't contain themselves. That would include Journey frontman Steve Perry leading the faithful in song:

The NLCS clincher was a glorious destiny for former outcast Travis Ishikawa, virtually catapulted from has-been to stardom over a fortnight or so, capped by this shot that put him in the same breath as Bobby Thomson in Giants lore. And he didn't have anyone stealing the signs for him:

Michael Morse said his pitch-hit home run had less to do with rehabbing from steroid use and more to do with spending the NLDS in I-ball. Just know the dude manned up and owned the former, and in this nation of second chances, he made the most of his, to the delight of G-fans.

And when he gets to Kansas City, he'll plans on having a different focus than Wilbert Harrison.